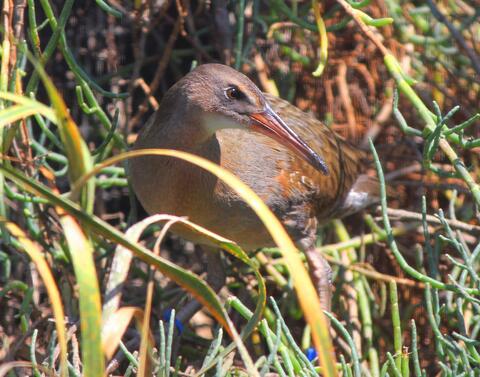 As an environmental champion for San Diego Bay and the surrounding waterfront, the Port of San Diego is continuing its support of The Living Coast Discovery Center’s Ridgway's Rail Propagation Program with a commitment of up to $180,000 over five years.

The endangered light-footed Ridgway’s rail is a gray-and-rusty colored bird about the size of a chicken that lives in the dense vegetation of coastal wetlands primarily in Southern California and Baja California. In San Diego Bay, Ridgeway’s rails are known to nest within the San Diego Bay National Wildlife Refuge and forage in the Chula Vista Wildlife Reserve. Rails have also been observed foraging in other San Diego marsh habitats, such as the F&G Street Marsh in Chula Vista.

The Living Coast, in partnership with the U.S. Fish & Wildlife Service, Hubbs SeaWorld, San Diego Zoo Safari Park, and California Department of Fish & Wildlife, has been conducting a regional propagation program, or captive breeding program, to rear Ridgway’s rails since 2000. The Port has been supporting the program for years in alignment with one of the Port’s strategic goals, which is to be a “A Port with a healthy and sustainable bay and its environment.”

“Supporting The Living Coast’s Ridgway’s rail breeding program is just one part of what we do to protect and enrich San Diego Bay’s natural resources,” said Chairman Dan Malcolm, Board of Port Commissioners. “Our vision is to advance a thriving waterfront that is sustainable and prosperous while enhancing the quality of the natural environment for present and future generations.”

“The continued support from the Port of San Diego has been essential for The Living Coast’s efforts in saving species like the light-footed Ridgway’s rail. We are seeing improvements in the population each year and in turn we are learning more and more about the environment we are all working to preserve,” said Aiyana Reissman, Animal Care Manager at The Living Coast Discovery Center.

The Port’s funding will support The Living Coast staff training and resources to breed and raise Ridgway’s rail chicks to adulthood; provide medical and nutrition care for adults, chicks, and juveniles; maintain proofing pens to ensure the rails become acclimated to the natural environment prior to release; track juveniles to assess their survival in the wild; maintain artificial nesting platforms for wild birds to use; upgrade and enhance current Ridgway’s rail educational exhibits on display at The Living Coast; and conduct annual Ridgway’s rail surveys in Southern California salt marshes.

The program’s goal is to increase the total number of rails in the wild. Statewide annual surveys began tracking the number of breeding pairs in 1980, and by 1985 the species reached its lowest point when only 142 breeding pairs were found in 14 marshes across the entire state. In part due to the success of captive breeding programs, the species reached a high of 656 breeding pairs in 18 marshes by 2016. San Diego Bay’s wetland habitats and local propagation program play a critical role in protecting this vulnerable endangered species from extinction. The rail is a subspecies of the Clapper Rail.

Through the Environmental Conservation department, the Port oversees the protection, conservation, and enhancement of the bay’s natural resources, including management of endangered species and sensitive wetland habitats. San Diego Bay supports over 300 species of marine and coastal birds, over 640 species of marine invertebrates, over 100 species of marine fishes, over 45 species of algae, over 2,500 acres of eelgrass beds, and more.

The Living Coast Discovery Center, on the Chula Vista Bayfront, is a nonprofit zoo and aquarium located within the San Diego Bay National Wildlife Refuge and has served the Chula Vista and greater San Diego community for over 30 years. Their mission is to inspire the community to connect with and care for our coastal environment. The Living Coast is one of the only zoos in the world where guests can see light-footed Ridgway’s rails.