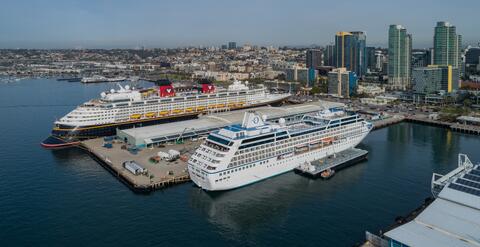 As environmental champions, the Port of San Diego continues to improve air quality and reduce greenhouse gas emissions on and around San Diego Bay. For the first time, two cruise ships can now simultaneously use shore power in San Diego rather than running their diesel engines while at berth. Previously, only one cruise vessel could plug in. On Friday, the Disney Wonder and the Insignia were the first two cruise vessels to use shore power at the same time in San Diego.

The Port is committed to being a good neighbor. Having two shore power outlets at the cruise ship terminals will result in at least a 90 percent overall reduction of harmful pollutants (while the ships are docked) such as Nitrous Oxides (NOx) and Diesel Particulate Matter (DPM) as well as a reduction in greenhouse gas emissions. The Port is also meeting California Air Resources Board (CARB) regulations that require essentially all cruise ships calling on California ports to use shore power beginning January 1, 2023. 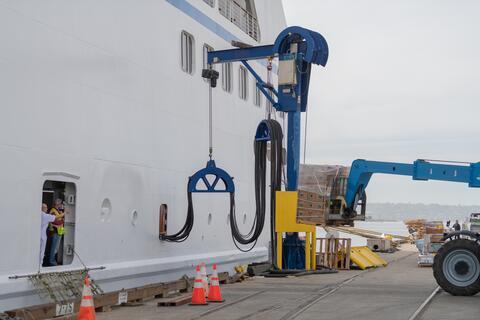 The Port installed its first shore power outlet at the cruise terminals in 2010, making it among the first ports in California to have shore power available for cruise ships.

Doubling shore power at the cruise terminals is among many electrification efforts underway in support of the Port’s Maritime Clean Air Strategy (MCAS), the most ambitious clean air strategy of its kind in the state, and likely in the entire country. The MCAS and its “Health Equity for All” vision represents the Port’s commitment to environmental justice, specifically cleaner air for everyone who lives, works, and plays on and around San Diego Bay.

Expanding shore power at the cruise terminals is among many of the Port’s clean air efforts. Other initiatives the Port is pursuing or are underway include: