“Gratitude” is 2023 Port Chairman Rafael Castellanos’ Theme, Executive Officers for the Board of Port Commissioners Sworn In 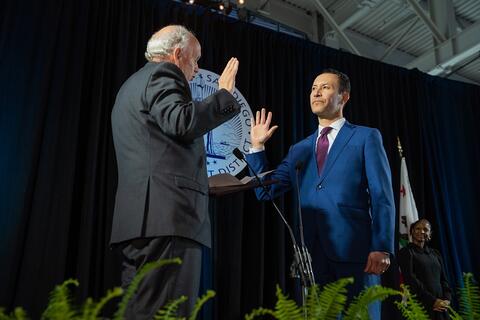 The Port of San Diego ceremonially swore in its 2023 Executive Officers for the Board of Port Commissioners on Wednesday, January 11 at the Port Pavilion on Broadway Pier located along the North Embarcadero on the San Diego Bay waterfront.

After being sworn in, Chairman Castellanos introduced his theme for 2023, “Gratitude,” in which he pointed to the opportunities ahead thanks to the work of the people and events that make up the Port’s past and present.

“San Diego Bay continues to nourish us, all while the chapters of history have unfolded,” said Chairman Castellanos. “Our beautiful natural harbor and deep-water port has seen people, nations, and industries come and go. Its resources are vast and rich, and we bear a special responsibility to make sure it continues to thrive and provide for all who depend on it, for the environment itself, and for future generations.”

He highlighted the Port’s cutting-edge major modernization effort, specifically its acceleration to a sustainable energy future through major investments in electrifying maritime operations. The Port has committed over $60 million for new electric equipment and infrastructure, including the purchase of North America’s largest fully electric harbor cranes, which will arrive at the Port later this year. The Port’s investment also includes more shore power to reduce ocean going vessel emissions while in port, innovative equipment to capture and treat emissions when shore power capability isn't available, and the nation's first fully electric tugboat.

Outgoing 2022 Chairman Dan Malcolm, the Board’s Imperial Beach appointee, recapped his “Port of People” theme and thanked Port staff for checking a lot of boxes for the year including securing more than $110 million in federal and state funding; breaking ground on the Gaylord Pacific Resort and Convention Center project on the Chula Vista Bayfront; getting an approved Port Master Plan Amendment for the National City Balanced Plan that includes an expansion of Pepper Park; advancing the proposed Seaport San Diego redevelopment project to environmental review; the continued revitalization of Seaport Village; reaching an agreement with the USS Midway Museum to convert Navy Pier into a new public park; advancing the proposed Topgolf venue for Harbor Island to environmental review; the cruise business rebound; and refreshing the iconic Imperial Beach Pier. 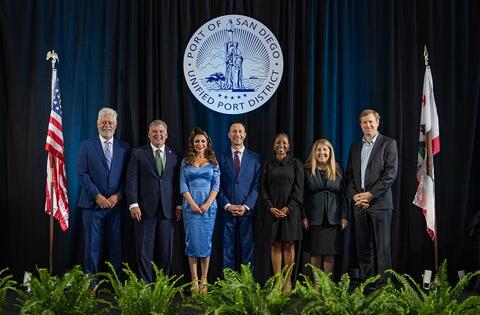 There are seven Commissioners on the Board. In addition to the executive officers and the outgoing Chairman, the other Board members are Frank Urtasun, Coronado’s appointee; Ann Moore, Chula Vista’s appointee, and Michael Zucchet, the third of three San Diego appointees. Commissioners are appointed by the city councils of their respective cities. They are appointed for four-year terms and may be reappointed for additional terms by their city councils. The Board of Port Commissioners is responsible for setting the policies by which the Port of San Diego conducts its day-to-day operations, under the guidance of its president and CEO.