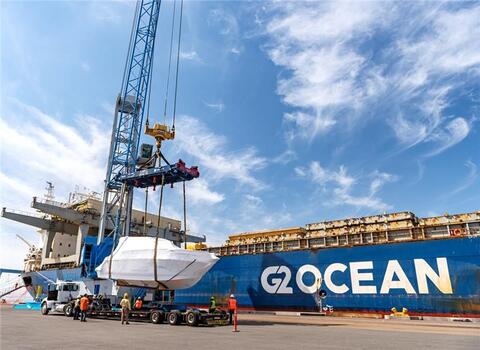 May is Maritime Month at the Port of San Diego, and the Port is celebrating by recognizing its Working Waterfront employees and showcasing the many benefits the maritime industry provides to the San Diego region. The Port’s maritime industry includes four sectors that are vital to our region’s economy: cargo, cruise, shipbuilding and repair, and commercial and sportfishing.

In 1933, a Joint Congressional Resolution established May 22 as National Maritime Day to recognize the men and women of the U.S Merchant Marine and the many other maritime industry workers who have transported cargo and defended the United States since 1775. The Port of San Diego joins ports throughout the nation to celebrate this day and, as it has done for many years, the Port of San Diego extends Maritime Day into a month-long celebration.

“Maritime Month gives the Port of San Diego an opportunity to honor the many valued employees working in the maritime industry along our San Diego Bay waterfront,” said Chairman Dan Malcolm, Port of San Diego Board of Port Commissioners. “As a nationally-designated Strategic Port, these workers play a vital role in supporting our local Naval Pacific Fleet, enhancing our national military readiness while also greatly contributing to our region’s diverse economy. We thank them for their dedication and commitment.”

Throughout Maritime Month, the Port will be spotlighting six employees from various businesses and organizations around San Diego Bay. They include Sophie Silvestri from Pasha Automotive Services, which processes approximately 500,000 imported vehicles at the Port’s National City Marine Terminal; Jorge Hernandez, a truck driver with Terminalift, a specialized cargo handling company; Maya Tahilramani with San Diego Refrigerated Services, a full-service public refrigerated warehousing company that specializes in servicing imports and exports; Camron Pate, a longshorewoman with ILWU Local 29; Pete Halmay, president of the San Diego Fishermen’s Working Group; and Sierra Landaiche from General Dynamics NASSCO. Their stories will be featured on portofsandiego.org/maritime-month and on the Port’s Facebook, Instagram and Twitter pages.

The maritime industry on San Diego Bay is responsible for about 13,400 direct jobs and has an approximately $2.7 billion economic impact on the region. The Port’s National City Marine Terminal and Tenth Avenue Marine Terminal provide about 1,500 family-sustaining jobs, and the local shipbuilding and repair industry supports approximately 14,000 jobs.

The shipyards along San Diego Bay, along with their suppliers, accomplish the shipbuilding, repair and maintenance work necessary to support the men and women of the United States Navy and their vessels that are homeported here. Jobs in this industry generate $1.25 billion in payroll for employees and company proprietors.

The Port’s cruise industry, which suffered greatly during the pandemic but is making a comeback, also has a great economic impact on the region. Each cruise that originates from the Port’s cruise ship terminals generates an average of $2 million for the local economy.

The sportfishing industry has an annual economic impact of approximately $300 million on the region and brings in about one million tourists annually. The Port has three sportfishing entities at America’s Cup Harbor – Point Loma Sportfishing, H&M Landing, and Fisherman’s Landing. These operations are supported by the largest bait fishing fleet in the world, which is homeported in San Diego.

The Port of San Diego thanks the many hardworking employees of its maritime industry and wishes them a happy National Maritime Day and Maritime Month.