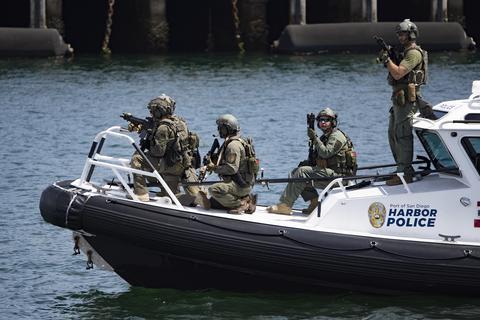 View and/or download event video and photos here. (Please note, in order to increase audience understanding, allow for narration, and ensure a safe training environment, the officers performed their skills at reduced speeds.)

The demonstration included a MARTAC team intervention (a MARTAC team is a SWAT team that operates in a marine environment), coordinated vessel firefighting and a simulated dive team rescue – all taking place on a training vessel adjacent to Broadway Pier. In addition to the live action demonstration, there was also a live K9 presentation, Vehicle Command Center tours and a Harbor Police recruit information booth.

With 22 public parks, five public piers, 20 hotels, dozens of restaurants, cargo and cruise ship terminals and thousands of marine vessels on and around San Diego Bay, Harbor Police officers are charged with keeping the community safe for those who live and work in the San Diego region, and for visitors from around the world. They:

The event was held in coordination with the San Diego Harbor Police Foundation. For more information about the functions of the Harbor Police Department in all aspects of maritime public safety on San Diego Bay, go to portofsandiego.org/harborpolice.