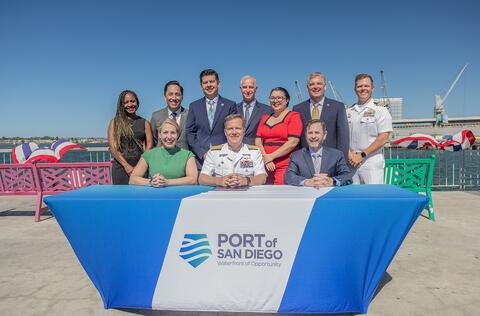 To further reduce greenhouse gas emissions and improve air quality and public health on and around the San Diego Bay Working Waterfront, Navy Region Southwest and the Port of San Diego have formed a first-of-its-kind partnership that gives the U.S. Navy access to participate in California’s Low Carbon Fuel Standard (LCFS) market. The groundbreaking federal/state initiative will provide millions of dollars for further electrification efforts for both Naval Base San Diego and the Port of San Diego.

Today at Cesar Chavez Park in the San Diego community of Barrio Logan, Navy and Port officials, joined by state and local partners, formalized the collaboration by signing an Intergovernmental Support Agreement and celebrated this first-of-its kind partnership and its multiple environmental and public health benefits for local communities, the region, and the state.

The Navy’s participation in this program will be the first ever participation by the Department of Defense in this type of carbon reduction effort. The Navy will generate LCFS credits while ships are plugged into shore power, rather than generating power internally using traditional, carbon-intensive fuels, and limiting emissions of greenhouse gasses in the surrounding community. Connecting ships to shore power while in port directly aligns with two Presidential Executive Orders requiring all federal agencies to take steps to reduce carbon emissions and support clean energy activities.

“Today is another example that shows the power of partnership – we are far more impactful together,” said Meredith Berger, Assistant Secretary of the Navy for Energy, Installations, and Environment. “The Department of the Navy is proud to work with the State of California on energy resilience, and we will continue to find more opportunities for collaboration. As the Navy and Marine Corps continue to take action against the threat of climate change, we work hand-in-hand with partners like California who are focused on the same mission, and as a community build our resilience and reduce the threat.”

The agreement aligns with the Port’s recently adopted Maritime Clean Air Strategy (MCAS), a policy document to help the Port identify future projects and initiatives to improve health through cleaner air while also supporting efficient and modern maritime operations. The MCAS and its vision, “Health Equity for All,” represent the Port’s commitment to environmental justice and is more ambitious than any other clean air policy document of its kind in the state. In fact, nearly all the MCAS goals and/or objectives go beyond what is currently required by the State of California.

“This is a win-win. We are proud to be working with the Navy on this and look forward to cleaner air and improved public health for all who live, work, and play on and around San Diego Bay,” said Chairman Dan Malcolm, Port of San Diego Board of Port Commissioners. “When we adopted our Maritime Clean Air Strategy last year, we said it would take a lot of money and strategic partnerships to achieve the ambitious goals we set. The annual revenue this new and innovative partnership generates will be dedicated solely for more electrification of Port and Navy operations and among those who will benefit the most are our neighbors in the communities of Barrio Logan, Logan Heights, Sherman Heights, and West National City.”

The LCFS is a cap-and-trade-like program where the producers of fossil fuels must either increase the use of plant-based carbon (e.g., ethanol and soybean oil) or buy credits to meet the requirement. The Navy will generate credits via its current use of shore power for its fleet. One LCFS credit generated is equivalent to one metric ton of carbon dioxide reduced. Creation of credits can be achieved utilizing alternative low carbon fuels or electrification. The credits are monetized through the services of a qualified and experienced broker. The Port utilizes the brokerage services of Anew EV, LLC (formerly Bluesource).

As the local participant in the state’s LCFS program managed by the California Air Resources Board (CARB), the Port will register, generate, and sell the credits from Navy shore power, and then utilize the proceeds from the sale to provide Naval Base San Diego with energy and utility improvement projects. In exchange, the Port will keep a specified portion of the Navy’s LCFS revenues. The Port will pay from its share of the revenues for Port personnel who will manage project design and construction of Navy identified projects at Naval Base San Diego and in Port operations. If this partnership – which is being conducted as a pilot program through 2030 – is successful, it could be duplicated between other U.S. ports and naval bases.

“We are excited to be the first in the Navy to participate in this innovative program,” said Rear Admiral Brad Rosen, Commander, Navy Region Southwest. “Our sailors and their families live and work throughout San Diego County; we are part of this community, and are proud to do our part towards improving air quality locally, and contributing to a more resilient electric infrastructure.”

California was the first state to establish an LCFS program in 2012 and placed it under the direction of the California Air Resources Board (CARB). In 2019, shore power became an eligible use, and the Port of San Diego was the first California port to enter the market. Since then, the Port has partnered with multiple tenants including Dole, NASSCO, BAE, and Austal USA.