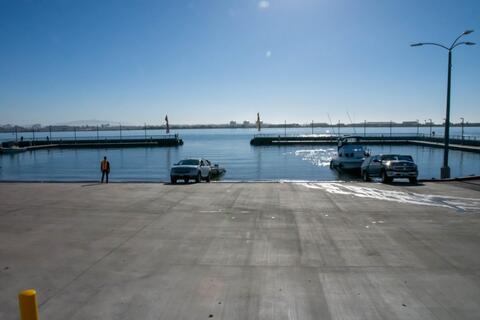 The Port of San Diego has been recognized by the American Public Works Association (APWA) San Diego-Imperial Counties Chapter with an Honor Award for the Shelter Island Public Boat Launch Facility project. The Honor Award is a component of the annual APWA Awards Program, which recognizes outstanding individuals, groups and chapters representing the best in public works.

The Port’s application focused on the magnitude of the project scope, the importance of the Shelter Island Boat Launch to the boating and fishing communities in San Diego as well as visitors, and the continued public involvement during both design and construction.

“The Port of San Diego is honored to receive this award from the APWA San Diego-Imperial Counties Chapter,” said Chair Ann Moore, Port of San Diego Board of Port Commissioners. “This launch ramp is a very popular amenity on San Diego Bay and we are pleased that we could provide these upgrades so that it can be enjoyed by our residents and visitors for years to come.”

Originally constructed in the 1950s and believed to be the busiest boat launch in California with approximately 50,000 launches per year, the Shelter Island Boat Launch Facility underwent upgrades in 1976 and 2005. After extensive planning and public outreach, the Port broke ground on the latest renovation in May 2017. The project entailed completely demolishing and replacing the former ramp. It also enlarged the maneuvering area in the facility’s basin, added longer boarding floats, a public walking platform with viewing areas, and new signage and lighting. The new facility was completed and opened to the public in December 2018.

Delivered within budget, the new facility was constructed by R.E. Staite Engineering and designed by Triton Engineering, both local companies.

The American Public Works Association (APWA) serves professionals in all aspects of public works—a fact that sets it apart from other organizations and makes it an effective voice of public works throughout North America. With a worldwide membership more than 30,000 strong, APWA includes not only personnel from local, county, state/province, and federal agencies, but also private sector personnel who supply products and services to those professionals. Membership in APWA is open to any individual, agency, or corporation with an interest in public works and infrastructure issues.

As a comprehensive public works resource, APWA continues in its rich tradition of making a difference both on an individual and professional level. APWA is a not-for-profit, 501(c)(3) organization that prides itself on its ability to provide varied educational and networking opportunities that help public works personnel grow in their professionalism and improve the quality of life in the communities they serve.