Reminder – Big Bay Boom is Back! Here’s What You Need to Know 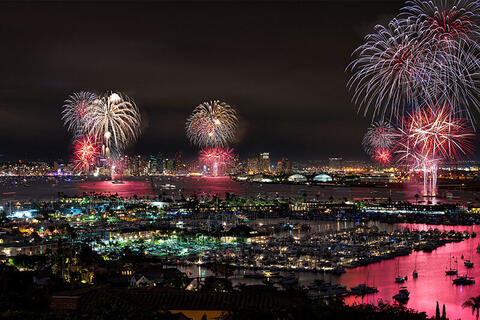 Beginning at 9 p.m. that evening, some of the nation’s most technically advanced pyrotechnics will be launched simultaneously from four barges placed strategically around San Diego Bay. The display will be accompanied by a musical simulcast and broadcast live on KGB 101.5 FM radio. Additionally, the 20-minute fireworks spectacular will be telecast live on Fox 5 San Diego and its affiliates in Los Angeles, San Francisco, Sacramento, Fresno and Bakersfield. Barge locations will be off the shorelines of Shelter Island, Harbor Island, North Embarcadero and South Embarcadero.

The Big Bay Boom is California’s largest fireworks show and is continuously ranked one of the top shows in the United States. In 2019, the last time the event occurred, MSN rated it one of the most spectacular shows in America. The live show was canceled in 2020 due to COVID-19 and a television special highlighting the best moments of past Big Bay Boom events aired on Fox 5 San Diego.

Approximately 500,000 San Diego residents and visitors come to the San Diego Bay waterfront to view the show live. Parking and viewing areas fill up quickly, so if you do plan to attend the live show, the Port of San Diego strongly advises that you get to the waterfront early and encourages the use of public transportation.

Where to Watch, Transportation and Parking
The Big Bay Boom will be visible over most of the northern and central parts of San Diego Bay. Popular public viewing locations are Shelter Island, Harbor Island, Spanish Landing, the North Embarcadero, Broadway Pier (food and beverages will be available for purchase at this location), Embarcadero Parks North and South, Cesar E. Chavez Park and Coronado Ferry Landing.

The Port of San Diego has partnered with Metropolitan Transit System (MTS) for expanded 4th of July train, trolley, and bus service. Additionally, since it is a major holiday, MTS’ “Friends Ride Free” promotion will be in effect. Prime viewing locations are near the following stations: County Center/Little Italy, Santa Fe Depot, One America Plaza, Seaport Village, Convention Center, and Gaslamp Quarter. More information on schedules and station locations is available here.

Plan in advance and take advantage of guaranteed parking through SpotHero, the nation’s largest parking reservations app. To reserve your parking spot, visit the Big Bay Boom SpotHero Parking Page and book a spot with rates up to 50% off drive-up.

Due to the large volume of visitors to Harbor Island and Shelter Island, the access roads to these parks may be closed to entering vehicles at some point during the day. Pedestrian access will remain available. As part of efforts to ensure a safe and accessible waterfront, there will be zero tolerance for illegal parking. Double parking, parking in a red zone and parking against posted signs will result in citations and/or towing.

Public Safety
To ensure a fun and safe experience for all, the Port of San Diego Harbor Police, along with other local, state and federal law enforcement partners will be prominent on the bay and waterfront on July 4th. Public safety is everyone’s responsibility. Residents and visitors are encouraged to report suspicious activity to a uniformed officer or call 911 or the Harbor Police non-emergency number at 619.686.6272. The public should be prepared to describe who or what they saw, when they saw it, where it occurred and why it’s suspicious. The public is reminded that possession of opened alcoholic beverages is prohibited along the waterfront and in Port parks, smoking and vaping are prohibited in Port parks, and drones and other unmanned aircraft systems are illegal to fly within five miles of an airport and above crowds.

Boater Safety
All boaters interested in viewing the event on the water are asked to be extra cautious and pay special attention to the Coast Guard Auxiliary patrol boats with flashing yellow lights. They will be positioned to ensure boaters do not get within the 1,000 feet perimeter safety zones around the four fireworks barges. All boaters are also encouraged to review the ABCs of California Boating. Children under the age of 13 are required to wear a lifejacket on a vessel of any length. Boaters enjoying the fireworks should be conscious of and avoid anchoring within eelgrass habitats. Eelgrass is an important habitat for juvenile fishes, seabirds, and other animals. It is easily damaged by boat anchors and propellers, so please avoid anchoring in eelgrass while enjoying the show.

Public Health
The California Department of Public Health recommends that attendees of mega events (more than 10,000 attendees outdoors) get vaccinated against COVID-19. Additionally, they encourage everyone to sign up for CA Notify as an added layer of protection for themselves and the community to receive alerts when they have been in close contact with someone who tests positive for COVID-19.