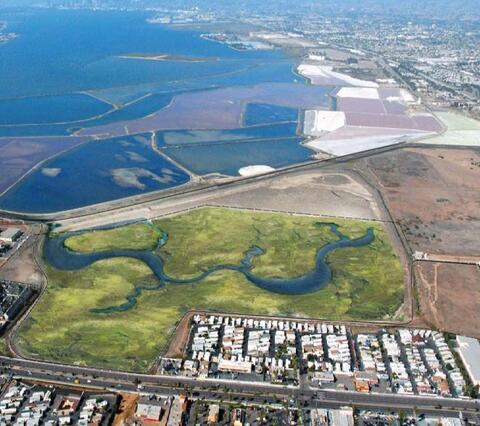 The Port of San Diego’s proposed wetland mitigation bank project in the South Bay marks a major milestone with two approvals needed to advance the project to the California Coastal Commission for consideration. The project, the first of its kind for San Diego Bay, would create a 76.5-acre coastal wetland mitigation bank on the southern portion of a Port-owned parcel known as Pond 20, a former salt evaporation pond that is currently vacant, isolated from tidal influence, and provides little habitat value due to its salt-encrusted surface and invasive plants.

At its meeting on April 13, 2021, the Board of Port Commissioners certified the Environmental Impact Report for the proposed wetland mitigation bank as well as approved a Port Master Plan Amendment (PMPA) that would add the parcel and use of it as a wetland mitigation bank into the Port’s coastal permitting jurisdiction. The PMPA goes next to the California Coastal Commission. If certified, and state and federal permits are obtained, construction could begin as soon as spring 2022, with completion in late 2023.

For the environment, the wetland would increase biodiversity, supporting a rich variety of wildlife including fish, birds, invertebrates, amphibians, and native plants; provide protection from storm surge, sea level rise and resulting erosion; improve water quality; increase carbon sequestration capacity; and more. As a community benefit, the future wetland and the wildlife it will attract will be easily visible to the thousands of residents and visitors who use the Bayshore Bikeway each week. As both a community and regional economic benefit, it will offer access to wetland mitigation credits for entities, primarily in the San Diego region, needing to meet future mitigation requirements for their developments. Revenue generated from those credits will go toward future public improvement projects and maintenance around the bayfront, with some specifically directed to projects in the adjacent Imperial Beach and San Diego Communities.

“Reclaiming the non-functioning Pond 20 site as a vibrant wetland mitigation bank is a marriage of good environmental policy and economic policy with community and Port benefits as well. It’s a win-win-win-win,” said Dan Malcolm, Imperial Beach’s representative on the Port of San Diego Board of Port Commissioners. “It also provides a road map for a new way to mitigate for coastal development impacts baywide and in our region. Pond 20 is the blueprint of a new way to get it done. This is very exciting.”

To learn more about the proposed wetland mitigation bank at Pond 20, visit the project page on the Port of San Diego’s website.

The Port purchased the property in 1998 as part of a larger, 1,400-acre land acquisition. Most of the land was transferred to State Lands leading to the creation of the South San Diego Bay National Wildlife Refuge as part of mitigation requirements for the San Diego International Airport Terminal 2 expansion. After the San Diego County Regional Airport Authority became a separate agency from the Port in 2003, the Port retained ownership rights to the project site, as provided in the SB 1896 (2002), with the intent of utilizing the project site for future development, subject to consistency with the Public Trust Doctrine.