The Port of San Diego has been honored with first place in Community Relations/Participation in the California Association of Public Information Officials (CAPIO) Excellence in Public Information and Communications (EPIC) Awards. The award was presented to the Port for its public outreach efforts on the Port Master Plan Update (PMPU) at CAPIO’s annual awards dinner, held April 11, 2018 in Santa Rosa, California.

The EPIC Award for Community Relations/Participation recognizes programs that promote deliberations among diverse community interests in order to guide a community decision on future direction. These efforts can also include comprehensive programs such as community visioning and public relations programs involving residents in community decision making on specific issues and projects.

Public outreach plays a fundamental role in the PMPU process. The Port of San Diego started with meetings with key stakeholders including the California Coastal Commission and the Port member cities of Chula Vista, Coronado, Imperial Beach, National City and San Diego. The Port also launched a roadshow in which Port commissioners and staff met with community groups. There were 12 meetings and open houses on the PMPU in 2017. The 12-month strategic outreach campaign to engage the public in the development of the PMPU yielded 5.1 million points of contact, via a diverse program of print, digital and in-person tactics.

“The Port of San Diego is a leader in public participation and citizen engagement, and the Port Master Plan Update is a great example of these efforts,” said Rafael Castellanos, Chairman of the Board of Port Commissioners. “Everyone in our region takes pride in our dynamic waterfront, and this planning initiative is an opportunity for anyone interested to get involved in the long-term future of San Diego Bay. I’m pleased that this effort has been honored with a statewide award.”

"I am pleased that the efforts of our Board and staff have been recognized with this prestigious statewide award from the California Association of Public Information Officials,” said Port Commissioner Ann Moore, who has been recognized with a National Planning Excellence Award for a Planning Advocate for leading the Integrated Planning initiative. “Our Integrated Planning effort began with public outreach and involvement, and we have continued to bring the community along with us as we draft the Port Master Plan Update. The resulting plan will reflect sound planning principles while honoring the values, hopes and dreams of our community.”

CAPIO also honored the Port’s Public Information Officer, Tanya Castaneda, at the event. Castaneda is an accredited public relations professional with more than 20 years in the media and communications industry. CAPIO named her the state’s Communicator of the Year for 2018. This career award recognized Castaneda’s abilities, skills and talents in managing the Port’s communications and outreach programs.

“Tanya is a dedicated Public Information Officer who has earned the trust and confidence of her colleagues and leadership at the Port of San Diego,” said Job Nelson, Assistant Vice President of External Relations. “We are fortunate to have her professional and transparent approach as we continue to pursue public outreach and engagement in Port issues and projects.”

In January 2018 she was honored with the Port’s highest employee honor, the Chairman’s Cup, for her outstanding efforts during 2017. 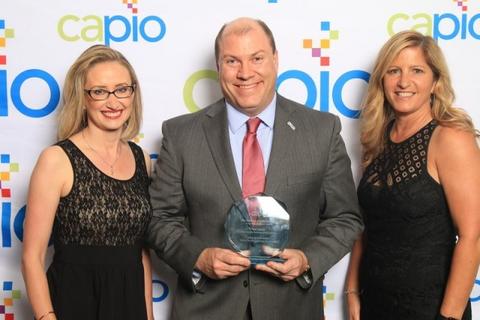 The Port of San Diego's Public Information Officer, Tanya Castaneda; Assistant Vice President, External Relations Job Nelson; and Director of Marketing & Communications Jenifer Barsell at the CAPIO Awards. The Port was honored for its excellence in communications at the April 11, 2018 event.

About CAPIO:
CAPIO is a membership organization serving more than 500 professionals throughout the public sector who engage communities through honest and transparent communication. CAPIO provides education and networking that helps its members and their agencies develop and advance. CAPIO believes that good government requires good communicators. Its members not only include government public information officers, but staff of school districts, parks and open space districts, private public relations firms, municipal television channels and more.