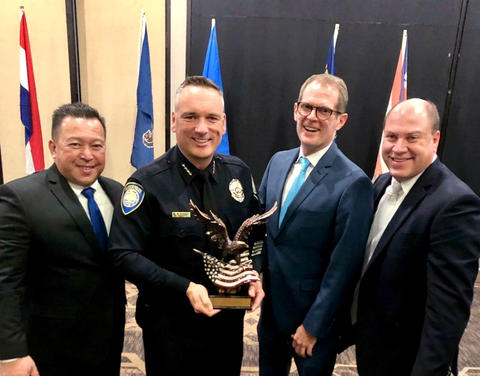 Mark Stainbrook, the Port of San Diego’s Vice President of Public Safety and Harbor Police Chief, has been recognized as the 2019 Law Enforcement Official of the Year by the San Diego County Crime Commission. Chief Stainbrook accepted the award at the Commission’s 34th Annual Blue Knight Awards Dinner held November 1, 2019 at the Four Points by Sheraton Hotel in San Diego.

The San Diego County Crime Commission’s annual awards dinner gives each law enforcement agency in the county the opportunity to honor members of their agency for outstanding service. The Law Enforcement Official of the Year award recognizes law enforcement officers who have gone above and beyond the call of duty to serve the community.

“The Port of San Diego congratulates Chief Stainbrook for receiving this prestigious honor from the San Diego County Crime Commission,” said Garry Bonelli, Chairman of the Board of Port Commissioners. “Since his appointment as Chief in March 2018, he has done a stellar job in leading the Harbor Police team in making San Diego Bay and its tidelands a safer place for our region’s residents and visitors.”

Chief Stainbrook’s accomplishments this past year include working with the U.S. State Department to train foreign police forces on best law enforcement practices, being elected as Treasurer for the San Diego County Chiefs and Sheriffs Association, being appointed to the International Association of Chiefs of Police Homeland Security Committee, being elected to the San Diego-Imperial County High Intensity Drug Trafficking Areas Executive Board, and guiding the funding of the San Diego Harbor Police Foundation, which has raised more than $100,000 to combat human trafficking since its inception in April 2019.

Chief Stainbrook joined the Port of San Diego Harbor Police in November 2011 and was appointed as Assistant Police Chief. Prior to joining the Port, he served as a lieutenant for the Los Angeles Police Department, where he worked in patrol, the gang unit, internal affairs, and intelligence and counterterrorism. He is a graduate of the FBI National Academy and a retired Lieutenant Colonel in the United States Marine Corps. Chief Stainbrook holds a master’s degree in Public Policy Administration from California State University Long Beach. In 2007, he was a US-UK Fulbright Fellow at Leeds University in the Religious and Theology Department and was seconded to the West Yorkshire Police Force.

Incorporated in 1981 and in full operation by 1983, the San Diego County Crime Commission has built public awareness about the impact of crime on community life and has served as a vehicle for citizen involvement in the fight against crime on its many fronts. Working cooperatively with citizens and public agencies, the Commission provides educational programs with volunteer efforts by citizens of the community.