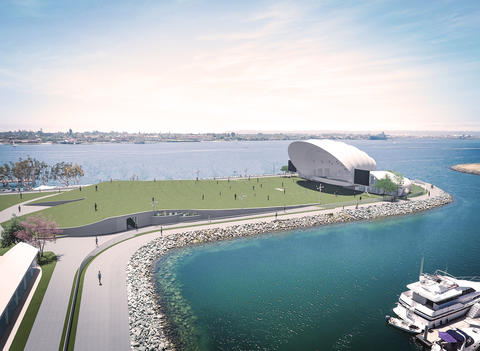 The Port of San Diego Board of Port Commissioners has granted a lease for The San Diego Symphony Orchestra Association’s Bayside Performance Park project, a significant milestone in the Symphony’s efforts to build a permanent facility on the San Diego Bayfront. A “park within a park,” the project will include the construction of a new performance venue to be operated by the Symphony as well as park improvements in the Port’s Embarcadero Marina Park South behind the San Diego Convention Center.

“The San Diego Symphony is investing a minimum of $45 million in improvements, including many public amenities and better performance facilities, creating a new, year-round attraction on the San Diego Bay waterfront. We’re confident concert-goers will love the improved access and state-of-the art stage and sound system, and bayfront visitors will love the new and improved park,” said Chairman Garry Bonelli, Port of San Diego Board of Port Commissioners.

“As we reach this important milestone in the development of a permanent outdoor performance space, Bayside Performance Park, I want to recognize the incredible partnership that has existed over the past four-and-a-half years between the Port of San Diego, the California Coastal Commission and the San Diego Symphony Orchestra,” said Martha Gilmer, San Diego Symphony CEO. “The work we have accomplished together to create and activate a public performance park will be transformative and have lasting impact to San Diego residents and visitors. Our hope is that it will become a coastal destination for everyone, and an iconic landmark for the region and its coastline.”

Since 2004, the Symphony has assembled and disassembled a temporary venue in the park for its Bayside Summer Nights concert series. The approved lease, with an initial 15-year term and four options to extend for a total of up to 50 years, allows the Symphony to operate the Bayside Performance Park for concerts and events, while maintaining public access to most of Embarcadero Marina Park South the majority of the year. With this important step now complete, the Symphony may begin construction as early as September.

About the San Diego Symphony

Founded in 1910, the San Diego Symphony is the oldest orchestra in California and one of the largest and most significant cultural organizations in San Diego. The Orchestra performs for more than 250,000 people each season, offering a wide variety of programming at its two much loved venues, Copley Symphony Hall in downtown San Diego and the Embarcadero Marina Park South on San Diego Bay. In early 2018, the San Diego Symphony announced the appointment of Rafael Payare as music director; his first concerts as Music Director will occur in October 2019. Payare leads the orchestra’s 82 full-time musicians, graduates of the finest and most celebrated music schools in the United States and abroad. The San Diego Symphony also serves as the orchestra for the San Diego Opera each season, as well as performing at several regional performing arts and community centers. For over 30 years, the San Diego Symphony has provided comprehensive learning and community engagement programs reaching more than 65,000 students annually and bringing innovative programming to San Diego’s diverse neighborhoods and schools. For more information, visit www.sandiegosymphony.org.