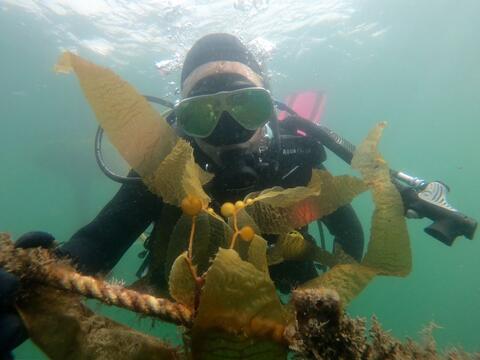 As a leader of the Blue Economy in the San Diego region, the Port of San Diego is adding five years onto its agreement with Sunken Seaweed, LLC., a local startup demonstrating the feasibility and benefits of seaweed and shellfish aquaculture in San Diego Bay. The Port is also investing an additional $100,000 in the project in exchange for an increase in revenue share from 5% to 6% and an extended revenue share period from 2043 to 2048.

Sunken Seaweed is led by two marine ecologists committed to pioneering sustainable seaweed aquaculture in San Diego. They are growing culinary seaweeds including dulse, sea lettuce, ogo, and other larger kelp varieties. Sunken Seaweed’s goal is to sell their seaweed to chefs and food production and distribution companies. They are also exploring a range of products including fertilizers, human food supplements, and livestock feed additives. Sunken Seaweed’s pilot farm is located at the northwestern end of Grape Street Pier Number 1 along the North Embarcadero.

“Sunken Seaweed has successfully established a seaweed farm in San Diego Bay and the results they’re seeing and partnerships they’ve formed are promising. It makes sense for us – both from an economic and environmental standpoint – to help them grow their operations and hopefully someday flourish as a longtime business in our waters. Doing so can help expand aquaculture in our region and throughout the state while also improving water quality, enhancing our ecosystems, and mitigating climate change impacts,” said Vice Chairman Rafael Castellanos, Port of San Diego Board of Port Commissioners.

The amended agreement will allow Sunken Seaweed to continue conducting seaweed and shellfish aquaculture ecosystem services research in San Diego Bay. Additionally, they’ll be able to expand and scale their land-based seaweed aquaculture operations at a new satellite location in Humboldt Bay in collaboration with a well-established, vertically integrated aquaculture company, Hog Island Oyster Company. The amendment will support the scaling of Sunken Seaweed operations and allow the company to position itself as an industry leader in seaweed production, as well as in ecosystem services research applied to seaweed aquaculture in port environments.

“Through the Port of San Diego’s initial investment in 2017, Sunken Seaweed and San Diego State University marine ecologists have been able to conduct extensive research and development in seaweed aquaculture, and discovered the huge potential that San Diego possesses in this field,” said Leslie Booher, co-founder, Sunken Seaweed. “With this reinvestment, not only can we now bring our farmed seaweeds to the market, but we’re able to continue working with expert researchers and engaging young people interested in sustainable aquaculture in San Diego. This is how we grow the blue economy, and we’re thrilled that our partners at the Port are champions of this sector.”

Aquaculture encompasses the cultivation of shellfish, fish, and aquatic plants/algae. The aquaculture sector is driven by a growing global demand for seafood and the lack of a domestic supply. The Sunken Seaweed pilot project is part of the Port’s Blue Economy Incubator, established to assist in the creation, development, and scaling of new water-dependent business ventures on San Diego Bay focusing on sustainable aquaculture and Port-related blue technologies.

The Sunken Seaweed project has ecological and economic benefits. The Port can use results of the pilot project to assess seaweed aquaculture as a tool for:

Additionally, shellfish and seaweed aquaculture is more ecologically beneficial and sustainable than land farming – it doesn’t require fertilizer, pesticides, added nutrients or fresh water. Seaweed and shellfish absorb all their nutrient requirements from sunlight and the surrounding water, and no waste is produced.

Partnering with companies like Sunken Seaweed through the Blue Economy Incubator supports the Port’s advocacy for emerging water-dependent uses and has a clear nexus to the Port’s mission. Economically, the Port will collect royalties as the project grows and produces revenue, and the project will inform future aquaculture operations and ecosystem services research within and around San Diego Bay and other ports throughout the state.

The Port is a long-time champion and catalyst of the region’s Blue Economy with its shipbuilding, commercial fishing, marine research, cruise, and cargo business lines. The Port’s Blue Economy Incubator is a launching pad for aquaculture and blue tech entrepreneurs by providing key assets and a diverse portfolio of services focused on pilot project facilitation. As the state-legislated trustee of tidelands around San Diego Bay, developing sustainable domestic aquaculture and driving blue tech innovation helps fulfill the Port’s public trust responsibility to promote fisheries and commerce, as well as aligning with our mission to enhance and protect the environment.