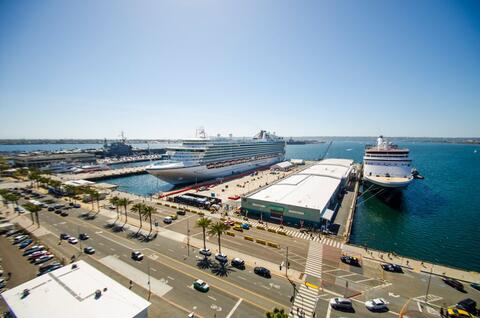 The Port of San Diego is doubling shore power capability at its B Street and Broadway Pier cruise ship terminals to improve air quality and reduce greenhouse gas emissions on and around San Diego Bay.

The Board of Port Commissioners has approved $4.6 million in funding for the project as well as various agreements related to equipment purchasing, construction and installment of additional shore power equipment that will allow two cruise vessels calling on San Diego to connect to shore power outlets at the same time. This means the ships will not have to run their diesel auxiliary engines while in port.

“This is a good investment and it is just one of our many clean air projects on the horizon,” said Chairman Michael Zucchet, Port of San Diego Board of Port Commissioners. “In addition to having the infrastructure available for nearly every cruise ship to run off electricity while in port, we’re also installing a solar-powered microgrid at our Tenth Avenue Marine Terminal, adding more public electric vehicle chargers on the bayfront, and more. The Port is committed to being a good neighbor, which includes cleaner air for everyone who lives, works and plays on and around San Diego Bay.”

The Port’s goal is to complete the shore power expansion by September 2022, four months ahead of recently updated California Air Resources Board (CARB) regulations that require essentially all cruise ships calling on California ports to use shore power beginning January 1, 2023. Having two shore power outlets at the cruise ship terminals will result in at least a 90 percent overall reduction of harmful pollutants such as NOx and Diesel Particulate Matter as well as a reduction in greenhouse gas emissions.

The Port first installed shore power at the cruise terminals in 2010, making it among the first ports in California to have shore power available for cruise ships and beating a state regulation to reduce diesel particulate emissions from at least 50 percent of cruise calls by nearly four years.

Expanding shore power at the cruise terminals is among many of the Port’s clean air efforts. Other initiatives include: