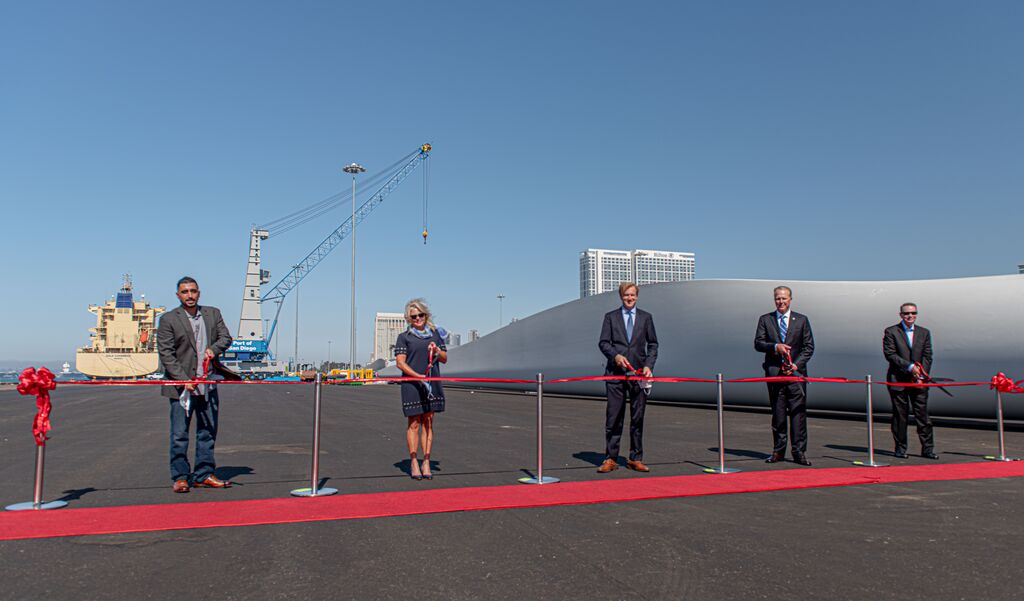 The Modernization project, also referred to as the TIGER project for the federal U.S. Department of Transportation grant program that contributed $10 million toward the project (TIGER stands for Transportation Investment Generating Economic Recovery), removed two obsolete warehouses and created much-needed laydown area for project cargo like windmill components. It also included improvements to on-dock rail, utilities, and new lighting and pavement. Additionally, an exemplary stormwater treatment system was developed to maximize stormwater capture on the marine terminal. The project has also resulted in new maritime cargo business for the Port and created more local jobs. Operations remained active during construction and have become more efficient due to the project’s completion.

“The completion of the Tenth Avenue Marine Terminal Modernization project is foundational to providing modern, open and flexible space for cargo operations,” said Port Vice Chair Michael Zucchet, Board of Port Commissioners. “As the fourth largest port in the state, this project not only improves our cargo handling capacity and creates more jobs, it also bolsters our designation as a Strategic Port in support of our national security efforts.”

“Under the leadership of U.S. Secretary of Transportation Elaine L. Chao, we at MARAD have been able to provide more funding for the U.S. maritime industry and ports so that projects like this could be completed,” said Maritime Administrator Rear Admiral Mark H. Buzby. “On behalf of the U.S. Department of Transportation and all of us at the Maritime Administration, we congratulate the Port of San Diego on the completion of the Tenth Avenue Marine Terminal Modernization Project.”

The Port began attracting new business even before the project was complete. In December 2017, the Port secured a contract with G2 Ocean, one of the world’s leading breakbulk and bulk shipping companies. In 2019, Mexican sugar producer Zucarmex signed on as part of the Port’s long-term breakbulk and project cargo strategy. More recently on September 9, the Port received a shipment of the longest windmill blades it had ever received – 45, 67-meter blades (nearly 220 feet). This shipment would not have been possible without the Modernization project.

“Our region is an economic powerhouse for trade and forward-thinking projects like the modernization of the Tenth Avenue Martine Terminal will keep San Diego competitive locally, nationally and globally," said Mayor Kevin L. Faulconer. "Not only will this project be a boost for our local economy, but it also helps toward our goal of creating a cleaner, greener city."

The Modernization was the first phase of a larger Tenth Avenue Marine Terminal Redevelopment Plan which envisions three distinct cargo nodes within the existing footprint of the terminal and is focused on current core specialties of:
•    Project, roll-on/roll-off, and break-bulk cargo such as military equipment, wind energy parts, shipbuilding steel, and vehicles;
•    Refrigerated containers for fresh produce such as bananas or other produce; and
•    Dry bulk cargo such as soda ash, aggregate and cement, used primarily in construction.

Next steps are market driven, so the timeline is dependent on funding, market trends and customer needs. The plan includes a variety of infrastructure improvements that would be phased over time.

Dick Miller, Inc. of San Marcos, California was awarded the construction contract for the Modernization project, which has been recognized with several awards including:
•    Outstanding Airport and Port Project from the American Society of Civil Engineers in 2020;
•    An award from the Construction Management Association of America in 2020 for Transportation Projects; and
•    Outstanding Industrial Stormwater BMP Implementation Project from the California Stormwater Quality Association in 2019.