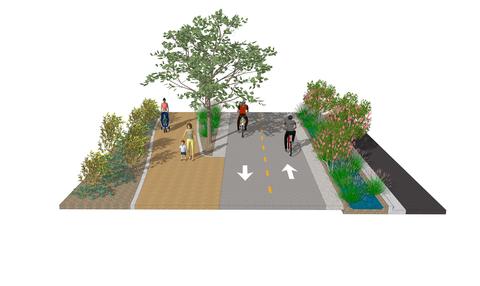 The Port of San Diego has awarded a construction contract for the Sweetwater Bicycle Path and Promenade Project for the Chula Vista Bayfront, clearing the way for construction to begin. At its meeting on July 24, 2019, the Board of Port Commissioners selected San Diego-based 3-D Enterprises as the winning bidder at nearly $4.3 million and approved plans and specifications for the project.

Sweetwater Path will wind through the future Sweetwater Park in the northern portion of the Chula Vista Bayfront, connecting the existing Bayside Park (site of the future Harbor Park) to Bay Boulevard at E Street. Ultimately, the path will create a loop connecting to the Bayshore Bikeway at the northern and southern ends of the Chula Vista Bayfront.

“Sweetwater Path is a key component of the future Sweetwater and Harbor Parks and supports the Port and City’s goals of creating a vibrant, active, healthy and safe place for all to visit, work and play,” said Chairman Garry Bonelli, Port of San Diego Board of Port Commissioners. “The path will provide public recreation and protect our environment and natural resources as well, which are critical aspects of the Chula Vista Bayfront project.”

“This is exciting,” said Chula Vista Mayor Mary Casillas Salas. “The Sweetwater Path is the first phase of over 200 acres of parks and open space that the development of our bayfront will provide to Chula Vista and South Bay residents. It is an integral component of our plans to transform the bayfront into a jewel that will benefit our entire region.”

“Sweetwater Path will give us beautiful views of San Diego Bay, the F and G Street Marsh and the adjacent Sweetwater Marsh National Wildlife Refuge,” said Commissioner Ann Moore, Chula Vista’s representative on the Board of Port Commissioners. “Whether you’re taking a casual stroll, on your morning run or riding the Bayshore Bikeway, you’ll love the connection to nature as well as the access to current and future waterfront amenities.”

With opening anticipated for the spring of 2020, the primary features include:

Construction is anticipated to begin in August with site preparation. The total project cost is $5.63 million, $4.8 million of which is being funded through an Urban Greening Grant awarded to the Port by the California Natural Resources Agency. The intent of the grant is to encourage the development of facilities that connect a community to destinations that they may normally drive to and to encourage the use of trees and vegetation to provide for oxygen production, carbon dioxide sequestration, and urban heat island reduction in temperatures. Additional funding of $794,000 is provided by the Port’s Capital Improvement Program (CIP) and $33,000 is provided by the City of Chula Vista.

The Sweetwater Path is a component of the Port and the City of Chula Vista’s partnership to develop the 535-acre Chula Vista Bayfront project, which seeks to transform a largely vacant and underutilized industrial landscape into a thriving recreational, residential and resort destination on the Chula Vista waterfront. When complete, residents and visitors will enjoy more than 200 acres of parks, open space, a shoreline promenade, walking trails, RV camping, shopping, dining and more. For more information, go to portofsandiego.org/chulavistabayfront.

ABOUT THE CITY OF CHULA VISTA
The City of Chula Vista is located at the center of one of the richest cultural, economic and environmentally diverse zones in the United States. It is the second-largest City in San Diego County with a population of 268,000. Chula Vista boasts more than 50 square miles of coastal landscape, rolling hills, mountains, parks, a marina, and miles of trails. Chula Vista is a leader in conservation and renewable energy, has outstanding public schools, and has been named one of the top safest cities in the country. Established neighborhoods, contemporary communities, startups, corporations, entertainment venues, a U.S. Olympic and Paralympic Training Site, and historic downtown all contribute to Chula Vista’s attraction for both families and businesses. A promising future includes implementing smart city technology citywide, developing the 535-acre Chula Vista Bayfront, and planning for a new university on 385 acres. Visit www.chulavistaca.gov.