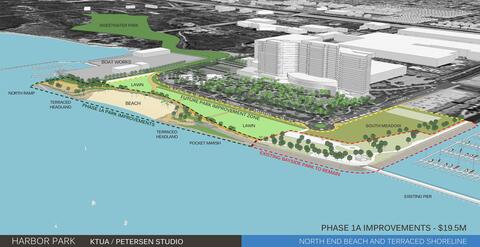 As part of the transformation of the Chula Vista waterfront on San Diego Bay, the Port of San Diego Board of Port Commissioners has approved a Coastal Development Permit (CDP) for the future Harbor Park. Planned for the central portion of the Chula Vista waterfront as an expansion and improvement of the current Bayside Park, Harbor Park will provide signature amenities and recreational opportunities.

“With a bigger and better beach, sunset terraces, added recreational offerings, and more, Harbor Park is really where we envision visitors and Chula Vista residents spending a lot of their time on the Chula Vista Bayfront,” said Chair Ann Moore, Chula Vista’s representative on the Board of Port Commissioners. “Harbor Park, along with the future Sweetwater Park and other public amenities, will give us the enhanced shoreline recreation and active commercial harbor we’ve been wanting in the South Bay.”

To be developed in phases, the first phase will focus on the northwest shoreline improvements including:

Future improvements are contingent upon availability of funding to construct each additional component of the park and include:

Harbor Park, along with the previously-approved Sweetwater Park, will account for more than half of the new park space planned for the Chula Vista waterfront. The parks design teams are KTU+A and Petersen Studio who were selected for their extensive urban park and waterfront design expertise – with an emphasis on local landscape architecture and natural resource management experience. The Port, along with the City of Chula Vista, in partnership with the design teams, conducted a three-part public outreach process through which the community members shared their vision for these important park spaces, helping to shape the future of the Chula Vista waterfront.

The Chula Vista Bayfront Project, a partnership between the Port of San Diego and the City of Chula Vista, envisions a vibrant, innovative destination in the San Diego region – a unique and welcoming place for people to live, work and play. When the project is complete, the public will enjoy more than 200 acres of parks, a shoreline promenade, walking trails, RV camping, shopping, dining and more. While providing long-awaited, enhanced shoreline recreation and an active commercial harbor in the South Bay, the Chula Vista Bayfront project will also establish ecological buffers to protect wildlife habitat, species and other coastal resources.

The Board approved a CDP for Sweetwater Park in April 2020. Planned for the northern portion of the Chula Vista Bayfront near E Street and Bay Boulevard, Sweetwater Park is envisioned as a meadow-type open space that would showcase the unique natural assets of San Diego Bay, encouraging passive recreation to complement the adjacent Sweetwater Marsh National Wildlife Refuge. Proposed features include:

These features are in addition to the $5.63 million for the Sweetwater Bicycle Path and Pedestrian Promenade, which will wind through Sweetwater Park. The pathway, which is primarily funded via a $4.8 million Urban Greening Grant from the California Natural Resources Agency, went through a separate design process and construction started in fall 2019. Sweetwater Path is anticipated to open to the public in late December. Construction on the rest of the park is scheduled to begin around the same time as Harbor Park in early 2023, with completion anticipated in early 2024. Sweetwater Park is required to be completed prior to a Certificate of Occupancy is issued for Gaylord Pacific.

For more information or to sign up for updates, visit portofsandiego.org/chulavistabayfront.