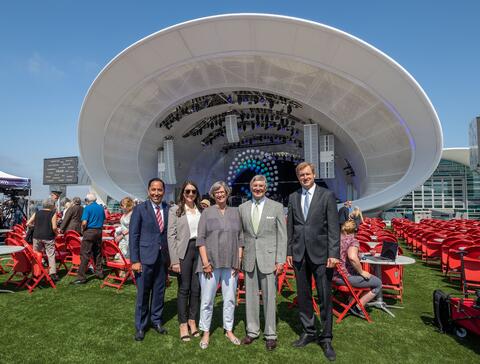 In support of the Port of San Diego’s goals for a vibrant and active San Diego Bay, the Port and the San Diego Symphony today celebrated the debut of the West Coast’s first bayside concert venue and park within a park, The Rady Shell at Jacobs Park.

This years-in-the-making bayfront performance venue in the Port’s Embarcadero Marina Park South provides enhanced opportunities for tourism, business growth, and San Diegans. Managed and programmed by the Symphony, and with more than 100 concerts and events year-round offering views of the bay, the marina, and downtown, The Rady Shell at Jacobs Park and the surrounding park represents a partnership of business, government leaders, and the arts in service of the community.

“We are so thrilled to have worked with the San Diego Symphony to bring this incredible bayside performance venue to life. The Rady Shell at Jacobs Park is just the kind of project that invigorates the community, stimulates the economy, and becomes part of the fabric of a city’s culture and identity,” said Chairman Michael Zucchet, Port of San Diego Board of Port Commissioners. “Bravo to the Symphony and thank you for bringing a second-to-none experience to San Diego Bay.”

Featuring a highly innovative, architecturally striking and acoustically superior outdoor stage, the permanent facility replaces a temporary venue allowing the Symphony to present a wider variety of musical presentations and enrich the patron experience with improved sightlines, expanded concession area, and permanent bathrooms. The Symphony’s expanded and diverse schedule of outdoor classical concerts is programmed by the Symphony’s Music Director Rafael Payare. The Orchestra will bring to audiences both the most beloved works of classical music as well as the brilliant new composers of our time. As in past years, the best in popular music and guest artists will also be well-represented.

“Today marks an incredible milestone in the journey to making the concept and dream of this iconic venue a reality,” said Martha Gilmer, San Diego Symphony CEO. “I am immensely grateful to the Port of San Diego, its commissioners and staff—as their partnership and dedication has helped us get to this moment: the official opening of The Rady Shell at Jacobs Park, San Diego Symphony’s gift to the region.”

The new, permanent performance venue will operate as a “park within a park” much like Chicago’s Millennium Park. Approximately two-thirds of the park will be open to the public 100 percent of the time, year-round. The portion of the park where the Symphony’s venue sits will be open for public use 85 percent of the year, and for larger gatherings the public can apply for special event permits just like other Port parks on the San Diego Bayfront. In addition, the Symphony’s project also included public improvements throughout the rest of the Port’s Embarcadero Marina Park South, including a widened public promenade around the venue that will remain open to the public during events, and refurbished and/or replaced seating benches, basketball courts, exercise equipment, gazebo, lighting, and restrooms.

A work of art in itself, the acoustically engineered stage features a concert shell that can be illuminated with LED lighting and is designed to complement the San Diego Convention Center sails and surrounding downtown development. The stage provides a larger performance space for both the orchestra and guest artists. Additional project design components include:

The Symphony’s project partners and consultants include:

From 2004 to 2019, the Symphony assembled and disassembled a temporary venue in the Port’s Embarcadero Marina Park South for its Bayside Summer Nights concert series.

ABOUT SAN DIEGO SYMPHONY
Founded in 1910, the San Diego Symphony is the oldest orchestra in California and one of the largest and most significant cultural organizations in San Diego. The Orchestra performs for more than 250,000 people each season, offering a wide variety of programming at its two much-loved venues, Copley Symphony Hall in downtown San Diego and The Rady Shell at Jacobs Park on San Diego Bay. In early 2018, the San Diego Symphony announced the appointment of Rafael Payare as music director. Payare leads the orchestra’s 82 full-time musicians, graduates of the finest and most celebrated music schools in the United States and abroad. The San Diego Symphony also serves as the orchestra for the San Diego Opera each season, as well as performing at several regional performing arts and community centers. For more than 30 years, the San Diego Symphony has provided comprehensive learning and community engagement programs reaching more than 65,000 students annually and bringing innovative programming to San Diego’s diverse neighborhoods and schools. For more information, visit www.sandiegosymphony.org.

ABOUT THE RADY SHELL AT JACOBS PARK
As the centerpiece of the 3.7-acre public Jacobs Park developed and managed by the San Diego Symphony on the city’s scenic Embarcadero, The Rady Shell is the first permanent outdoor venue in the San Diego Symphony’s century-long history, designed to host more than 100 concerts and events year-round. The project has been developed in partnership with the Unified Port of San Diego with 96% of the $85 million cost raised privately by the Symphony.

As innovative in design as it is spectacular in setting—offering 360 degrees of sky and sea—The Rady Shell is an unprecedented resource for the Symphony. The venue will host an expanded schedule of diverse outdoor concerts programmed by Music Director Rafael Payare, including an exciting roster of commissioned works and premieres, as well as performances by international touring artists and free programs. It will also be available year-round for non-profit community groups, schools and individuals. Jacobs Park, owned and managed by the Symphony, will surround this venue with walkways, dining pavilions and recreational facilities in the heart of the Embarcadero and will be accessible to the public for free on most days of the year.