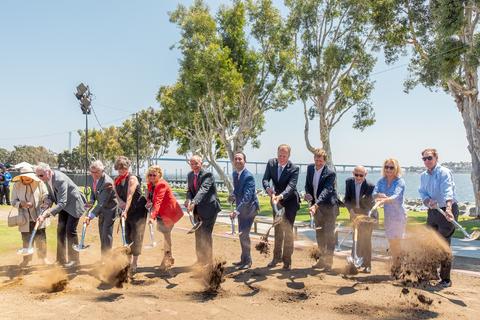 In support of the Port of San Diego’s goals for a vibrant and active San Diego Bay waterfront, the Port and the San Diego Symphony held a groundbreaking ceremony for the highly anticipated Bayside Performance Park project in the Port’s Embarcadero Marina Park South on Thursday, August 29, 2019.

A “park within a park,” the project will include an upgraded public park and a new, permanent performance venue to be operated by the Symphony. Featuring a highly innovative, architecturally striking and acoustically superior outdoor stage, the permanent facility will allow the Symphony to present a wider variety of musical presentations and enrich the patron experience with improved sightlines, expanded concession area and permanent bathrooms. Public improvements for the Port’s Embarcadero Marina Park South will include a widened public promenade around the venue that will remain open to the public during events and refurbishment and/or replacement of existing benches, basketball courts and exercise equipment, gazebo, lighting and restrooms.

“The San Diego Symphony is a wonderful partner. We couldn’t be more pleased that we’ve moved into the construction phase with the first concerts scheduled to begin next summer,” said Chairman Garry Bonelli, Port of San Diego Board of Port Commissioners. “The Symphony’s $45 million minimum investment will create a stunning year-round performance venue right on the San Diego Bay waterfront, and provide a new and improved public park that everyone can enjoy.”

"Today marks the end of a nearly four-year process that brought together the Port of San Diego and the San Diego Symphony Orchestra in creating a new vision for the tidelands,” said Martha Gilmer, San Diego Symphony CEO. "Now we begin working together to build a remarkable project designed to bring this park alive with music and activities for everyone in our community. I am so grateful for everyone who shared and believed in our vision, and are working with us to make that vision - of creating an extraordinary public park which will serve San Diegans for generations to come - a reality. As the project evolved, it was wondrous to see how many individuals joined us in a variety of roles, each sensing and being inspired by the potential impact of this place where art and nature meet. We cannot wait to welcome our audiences old and new to Bayside Performance Park."

A work of art in itself, the acoustically engineered stage features a concert shell designed to complement the San Diego Convention Center sails and surrounding downtown development. The stage provides a larger performance space for both the orchestra and guest artists. Additional project design components include:

With the first concerts scheduled for summer 2020, the Symphony estimates that average attendance will be approximately 3,100 per event, however the venue will have the flexibility to accommodate a maximum capacity of 10,000 attendees. Bayside Performance Park will be part of the overall park at the Embarcadero Marina Park South and the park will be open to the public during non-event hours, or 85% of the year. The Symphony’s Bayside Performance Park partners and consultants include:

The Symphony has assembled and disassembled a temporary venue in the Port’s Embarcadero Marina Park South for its Bayside Summer Nights concert series since 2004.

ABOUT THE SAN DIEGO SYMPHONY:
Founded in 1910, the San Diego Symphony is the oldest orchestra in California and one of the largest and most significant cultural organizations in San Diego. The Orchestra performs for more than 250,000 people each season, offering a wide variety of programming at its two much loved venues, Copley Symphony Hall in downtown San Diego and the Embarcadero Marina Park South on San Diego Bay. In early 2018, the San Diego Symphony announced the appointment of Rafael Payare as music director; his first concerts as Music Director will occur in October 2019. Payare leads the orchestra’s 82 full-time musicians, graduates of the finest and most celebrated music schools in the United States and abroad. The San Diego Symphony also serves as the orchestra for the San Diego Opera each season, as well as performing at several regional performing arts and community centers. For over 30 years, the San Diego Symphony has provided comprehensive learning and community engagement programs reaching more than 65,000 students annually and bringing innovative programming to San Diego’s diverse neighborhoods and schools. For more information, visit www.sandiegosymphony.org.