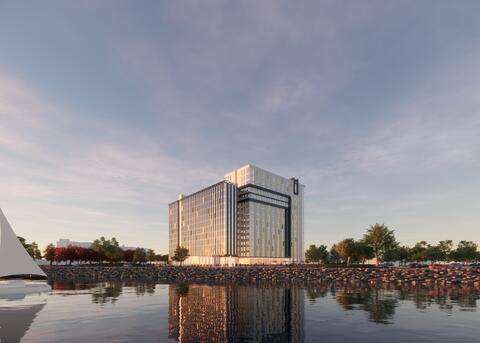 As part of efforts to enhance our beautiful San Diego Bay waterfront as a destination, the Port of San Diego and Sunroad HIE Hotel Partners (Sunroad) are making progress on Sunroad’s proposed Harbor Island East Hotel on an approximately seven and a half-acre parcel next to and west of Sunroad Resort Marina. At its meeting on April 13, 2021, the Board of Port Commissioners approved an Option to Lease Agreement (Option) for the project as well as an Addendum to the 2014 Revised Final Environmental Impact Report.

Sunroad is proposing to develop a 450-room hotel with two yet-to-be-determined brands on East Harbor Island: a 12-level wing with extended stay rooms and a 15-level wing with limited service rooms. Amenities open to the public would include a walk-up restaurant and bar area accessible via the sidewalk on Harbor Island Drive, a 15-foot wide promenade, interior pathways, and an open space area. There will also be retail shops, parking, and temporary and permanent mini destinations to draw people to and through the hotel and amenities, mobile carts for retail/specialty items and/or food, and game/exercise spots. Amenities for hotel guests include an outdoor swimming pool with jacuzzi spa and outdoor private function space, a fitness center, meeting rooms and ballrooms.

“East Harbor Island has so much untapped potential,” said Chairman Michael Zucchet, Port of San Diego Board of Port Commissioners. “The proposed Sunroad hotel site, right on the San Diego Bay waterfront, offers an unbeatable combination of coastal access and stunning views. With several high-performing restaurants and hotels already in the area, and proximity to the San Diego International Airport, redeveloping this and other underutilized parcels on East Harbor Island will further enhance and activate this bayfront destination.”

“We are very excited to move forward with this project,” said Uri Feldman, president, Sunroad HIE Hotel Partners L.P. “It is the right solution for a property which the Port has had envisioned for over 30 years.”

The Port and Sunroad have negotiated a 66-year lease, which would require Sunroad to invest a minimum of $153 million into the hotel project. The Option, with the negotiated lease attached, includes conditions precedent that Sunroad is required to meet, within specified deadlines, before execution of the lease. The Option reduces risk to the Port and Sunroad and includes eight conditions related to things like working drawings, construction contracts, permitting, financing, management agreements, and inspections. It also allows the leasehold to be leased to another tenant during the Option term. The Option has a term of two years and allows for up to six months of extensions. Once all the conditions are met within the specified dates, Sunroad can exercise the Option and enter into the Lease.

For next steps, Port staff is working to finalize a draft Coastal Development Permit for the project and anticipates bringing it to the Board for consideration, along with requesting concept approval for the project, potentially in late spring or early summer.

The Port continues to research potential options for a 48-acre area of East Harbor Island where the Port of San Diego Harbor Police Headquarters is located and where rental car services currently have some operations and storage. The area also includes the site of the Lockheed Martin building, which is currently undergoing demolition.