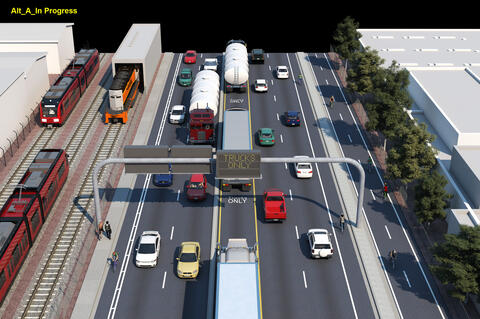 (Additional images are available upon request.)

The Port of San Diego’s Port Master Plan Update process is ongoing and has already resulted in a major achievement – a breakthrough vision to redesign the industrial area of Harbor Drive and smartly manage the truck traffic passing through Barrio Logan and National City.

The Port is planning to create a better truck route that will also enhance pedestrian, bicycle and transit connections while making maritime cargo hauling more efficient and reducing greenhouse gas emissions. This concept, called Harbor Drive 2.0 – A Greener, Safer, Healthier Harbor Drive, includes a “haul road” and intelligent transportation systems to separate trucks from regular traffic, encourage them to stay out of Barrio Logan, and much more. Through smart planning, the Port will reduce truck traffic impacts by redesigning the industrial section of Harbor Drive using intelligent transportation systems, while adding protected bike lanes, beautification and other elements.

On October 9, 2020, the Board of Port Commissioners approved a framework Memorandum of Understanding with Caltrans and SANDAG to move this concept forward.

“The Port Master Plan Update process is all about collaborative planning. Our plans for transportation infrastructure should complement and integrate with broader, regional transportation plans – and Harbor Drive 2.0 is a great example of this approach,” said Port of San Diego Chair Ann Moore. “I’m very pleased that we are now actively pursuing a concept that came out of our Port Master Plan Update visioning process – the creation of a haul road. This is a smart way to address community concerns about truck traffic while making maritime cargo hauling more efficient.”

The Port of San Diego’s two cargo terminals support thousands of good-paying jobs. Truck traffic from the Port and many other employers has been raised as an issue over the years by surrounding communities. Harbor Drive 2.0 is envisioned for the portion of Harbor Drive between the north entrance to the Tenth Avenue Marine Terminal and the National City Marine Terminal, as well as major thoroughfares that connect Harbor Drive to the interstate highway system, including Cesar Chavez Parkway, 28th Street, 32nd Street and Civic Center Drive.

“We at Caltrans are excited to formalize this Memorandum of Understanding,” said Caltrans District Director Gustavo Dallarda. “By regional partners joining resources to bring improvements in safety and mobility and emissions reductions, the quality of life for communities like Barrio Logan, along the working waterfront will be improved.”

“SANDAG is pleased to continue work with the Port of San Diego and Caltrans to build a state-of-the-art waterfront for the San Diego region,” said SANDAG Executive Director Hasan Ikhrata. "This MOU supports continued transportation improvements for goods movement and the military in the heart of San Diego. It plays an important role as SANDAG reimagines a transportation future that is faster, fairer, and cleaner.”

“As the San Diego City Councilmember for District 8, I am pleased to lend my strong support for the MOU between the Port of San Diego, SANDAG, and Caltrans for the Harbor Drive 2.0 Project,” said San Diego Councilmember Vivian Moreno. “The Harbor Drive corridor is a vital economic corridor for the working waterfront and the entire San Diego region. Thank you to the Port Commissioners for your prior approval of the Harbor Drive Multimodal Corridor Study as it has provided the framework for the future of this vital transportation corridor. The Port’s collaboration with SANDAG and Caltrans will help to improve efficient goods movement in a safe and healthy way.”