As a Port of communities, the Port of San Diego continues to take quick and significant action toward further improving air quality on and around San Diego Bay. Today, the Port accepted an approximately $2.7 million grant from the San Diego County Air Pollution Control District (SDAPCD), which provides incentive funding to support clean technology investments, especially in underserved communities. The grant will partially fund electrical upgrades to power two new all-electric mobile harbor cranes that will help improve public health and reduce diesel particulates, a significant milestone in bringing cleaner air to the Portside communities of Barrio Logan, Sherman Heights, Logan Heights, and West National City. The cranes will be the first of their kind in North America when they begin operating at the Port’s Tenth Avenue Marine Terminal (TAMT) in summer 2023.

The funding is made possible through California Climate Investments and the Community Air Protection Program (CAPP). California Climate Investments is a statewide program that puts billions of Cap-and-Trade dollars to work reducing greenhouse gas emissions, strengthening the economy, and improving public health and the environment – particularly in disadvantaged communities. CAPP was established under Assembly Bill (AB) 617 to improve the air quality in communities that have been disproportionately burdened by air pollution.

“Our new electric cranes will be a game changer for our communities as well as the environment and our regional economy. We are happy to have this critical funding from San Diego County APCD to ensure we have clean and reliable power to support the new cargo handling equipment,” said Chairman Dan Malcolm, Port of San Diego Board of Port Commissioners. “These cranes will replace our old diesel crane, eliminating a major source of pollution at our terminal. We will also gain a competitive edge over other West Coast ports. All of this means improved public health and air quality, more opportunities for the Port, and more jobs for our region. Everybody wins.”

“Every adult and child deserve to breathe clean air! Our Portside communities have been disproportionately impacted by a lack of investment and poor air quality for decades. Assembly Bill 617 will provide long overdue funding for this community to support cleaner air technology,” said Vice Chair Nora Vargas, San Diego County Board of Supervisors and San Diego County Air Pollution Control District Chair. “The addition of charging infrastructure for electric cranes is a huge step forward that will reduce diesel particulates and improve air quality for the families and children of this community. I am proud that District 1 will be home to a crane that is the first of its kind in Northern America, and I hope that more cities follow suit, and more ports include this type of clean technology.”

In support of the electric cranes, the Board today also: 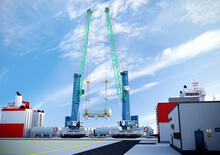 In January, the Board of Port Commissioners authorized a purchase agreement with Germany-based Konecranes, which has an office in San Diego, for two all-electric, battery-supported Gottwald Generation 6 Mobile Harbor Cranes to replace the diesel-powered crane currently in use at TAMT. The Port purchased the cranes for approximately $14 million, paid for through the Port’s Economic Recovery Program, which was established for the approximately $110 million in federal stimulus funds being distributed to the Port via the American Rescue Plan Act (ARPA) and the State of California’s Coronavirus Fiscal Recovery Fund.

The conversion from a diesel-powered crane to an all-electric crane system is a big step toward achieving a long-term goal of the Port’s Maritime Clean Air Strategy (MCAS) – 100 percent zero-emission cargo handling equipment by 2030 – and is ahead of California Air Resources Board (CARB) regulations.

In addition to the environmental and public health benefits, the new crane system will represent the heaviest lift capability of any crane system currently in place on the West Coast and will enable the Port to attract new business opportunities due to the increased maximum lift capacity – up to 400 metric tons (MT) versus the 100 MT lifting capacity of the Port’s diesel crane. Most of the heavy-lift cargoes destined for this region weigh more than 200 MT, including larger pieces of solar, wind, and industrial energy equipment as well as project cargoes. The new cranes will allow the Port to compete for this business. With their heavier capacity and faster offloading speed, the new cranes will also better serve our existing operations when crane movements are needed.

TAMT, one of the Port’s two marine cargo terminals, serves as an omni-cargo terminal consisting of a 96-acre facility and handles breakbulk, bulk, container, and project cargos such as transformers for regional utilities in addition to steel and engines used in local shipbuilding.

In October 2021, the Board of Port Commissioners adopted the MCAS, the most ambitious clean air policy document of its kind in California, and likely in the country. It identifies 34 objectives to improve health through cleaner air for all who live, work, and play on and around San Diego Bay while also supporting efficient and modern maritime operations. With its “Health Equity for All” vision, the MCAS represents the Port’s commitment to environmental justice, and nearly all the MCAS goals and/or objective go beyond what is currently required by the State of California.

Some of the objectives identified in the MCAS that are currently underway or being implemented soon include: