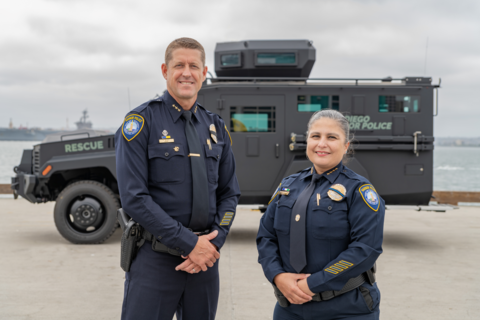 Port of San Diego President and CEO Joe Stuyvesant has appointed Magda Fernandez as the new Harbor Police chief/vice president of public safety, and she has promoted Jeffrey Geary to assistant chief. Chief Fernandez and Assistant Chief Geary were formally sworn in May 19 during a ceremony at the Port Pavilion on Broadway Pier. Cross-trained to prevent crime on the waterfront and fight fire on the water, the Harbor Police Department provides for the safety of our communities and resources along San Diego Bay and at the San Diego International Airport.

“Chief Fernandez and Assistant Chief Geary are committed to community policing and public safety on our bayfront and throughout the region,” said Port President and CEO Joe Stuyvesant. “Their diverse and broad experience, training, and skillsets will serve them well in their new roles, and we look forward to the continued excellence and evolution of the Harbor Police Department with them at the helm.”

Chief Fernandez is the first Latina to serve as chief of Harbor Police. She had been serving as acting chief since early February and was acting assistant chief from November 2021 to February 2022. Chief Fernandez joined the Port of San Diego Harbor Police Department as a recruit in 2001 and rose in the ranks to captain in February 2021. Over the years, she has led various department units, including investigations and intelligence, professional standards, and training as well as the patrol and administrative sections. Chief Fernandez also represented Harbor Police as a detective on the FBI’s Joint Terrorism Task Force and helped establish the department’s Terrorism Liaison Officer program, which focuses on educating officers and members of the Port community on being aware of potential terrorism and criminal activities. From 1994 to 2018, she served in the U.S. Coast Guard in various roles including as a criminal investigator and as an environmental and marine casualty investigator. Before the Coast Guard and Harbor Police, she was an emergency medical technician, and then a rescue diver with the Santa Cruz Search and Rescue Team. Chief Fernandez’s achievements include receiving the Port’s 2018 Chairman’s Cup Award for her peer support work in the department and being named Harbor Police Officer of the Year in 2008. Chief Fernandez recently graduated from the National Command & Staff College Leadership Program and holds a bachelor’s degree in criminal justice from Colorado Technical University.

Assistant Chief Geary has been with Harbor Police for 20 years. Most recently, he has been overseeing Harbor Police administrative operations, including criminal investigations, internal affairs, homeland security, training, communications, special events, and special teams including the dive team. He is also currently an instructor for law enforcement vessel and dive operations, marine firefighting, and HazMat and chemical, biological, radiological, nuclear, and high-yield explosives (CBRNE) response. Assistant Chief Geary’s career with Harbor Police has also included being the commanding officer for patrol operations; police field supervisor and watch commander; dive team supervisor; and field training officer. He has also worked overseas with the U.S. State Department’s Bureau of International Narcotics and Law Enforcement Affairs in providing training to the Philippine National Police and the Philippine Coast Guard. Assistant Chief Geary received the Harbor Police Distinguished Service Medal in 2018 for his work with the dive team. He holds a bachelor’s degree from the University of California, Santa Barbara, and a U.S. Coast Guard Captain’s License which includes an endorsement to operate submarines.