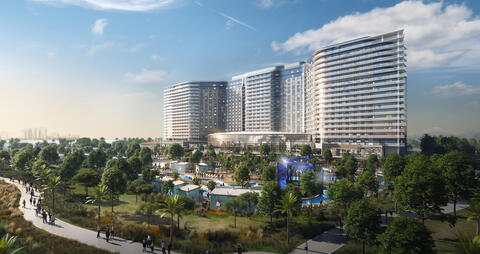 The Port of San Diego and City of Chula Vista take the next major step toward breaking ground on the Gaylord Pacific resort, the adjacent convention center, associated public infrastructure, and two parks on the Chula Vista Bayfront.

On June 15, 2021, the Board of Port Commissioners and City of Chula Vista City Council approved the following critical leasing, financing, and construction documents:

RIDA Chula Vista, LLC is the Port and City’s development partner on the project. This critical step is another major milestone and moves the Port, the City, and RIDA closer to financing, leasing, and starting construction of the convention center, resort hotel, and public infrastructure.

“This is a momentous day and represents a significant achievement for the Port of San Diego and City of Chula Vista. RIDA’s Gaylord Pacific project is key to unlocking the full potential of our beautiful Chula Vista Bayfront,” said Commissioner Ann Moore, Chula Vista’s representative on the Port of San Diego Board of Port Commissioners. “This stage is critical to get right and the team’s careful execution of this process and complex financing structure is keeping this important project on track and will ensure the project is implemented in an elegant way.”

“We are thrilled that we are that much closer to the transformation of our Chula Vista Bayfront,” said Chula Vista Mayor Mary Casillas Salas. “This is a complex project with the City, the Port, multiple agencies, and a private developer involved. But we all have the same goal, to create a world class destination for tourists, visitors and residents.”

Gaylord Pacific will be constructed west of Marina Parkway between H and G Streets. RIDA is preparing to do some early utility work, which is anticipated to begin late summer 2021. The Port, the City, and RIDA anticipate closing escrow in late 2021/early 2022, clearing the way for RIDA to begin construction on the resort hotel, public infrastructure, and convention center soon thereafter and open as early as 2025.

“These milestone approvals set in motion an important regional redevelopment; the seeds of which were sown decades ago by the visionaries at the Port of San Diego and the City of Chula Vista. We’re thankful for the tireless commitment of our partners at the Port and City, whose thoughtful and detailed approach, made this achievement possible,” said Luke Charlton COO RIDA Development Corp. “We believe the Gaylord Pacific will combine best in class hospitality, convention, and resort amenities and as we emerge from a pandemic that has devastated our industry and nation, we are enthusiastic about its future and the future of the Chula Vista Bayfront.”

Next Steps
Once all required documents are approved, the Port, City, and the Authority will file a Validation Action. After the Validation Action is complete, the parties would then move forward with issuing the Authority Bonds and entering into their respective leases to commence construction of the convention center, resort hotel, and associated public infrastructure and parks.

The Port and the City formed the Authority to finance most of the Public Contribution. The Public Contribution is anticipated to be made in part through the issuance of taxable and tax-exempt bonds by the Authority (collectively, the Authority Bonds), with the Port and the City as the sole members of the Authority committing certain funds to repay the Authority Bonds. Additional funding will be provided through grants, a contribution of $25 million from the County of San Diego, funds from the Port that have been set aside and collected through various projects on the Chula Vista Bayfront, such as funds from Pacifica in connection with a land exchange, and other funds on hand that will be contributed by the City.

Project Cost, Funding & Economic Impact
The resort hotel and convention center is the centerpiece and catalyst project of the Chula Vista Bayfront Master Plan (CVBMP), a decade-long joint planning effort by the Port, the City of Chula Vista and a broad coalition of stakeholders. The total estimated cost for the resort hotel, convention center, parking structure, and associated public infrastructure and parks is estimated to be approximately $1.23 billion. The Port, City, and RIDA are all investing in the project as follows:

The County of San Diego is contributing to the public infrastructure with $25 million in funding through the Chula Vista Bayfront Project Funding Agreement entered into among the County, the Authority, the City, and the Port in October 2019.

The Gaylord Pacific project is expected to have a tremendous regional economic impact, generating approximately $1.6 billion during construction and an estimated $475 million per year once complete. On the job front, it’s estimated the project will support 10,000 jobs (direct and indirect) through construction, nearly 1,500 permanent jobs on site, and nearly 3,900 jobs regionally per year.

Project Details
Gaylord Pacific will be operated by Gaylord Hotels, the large convention hotel brand of Marriott International. It will include:

To ensure connectivity and accessibility to the wider Chula Vista Bayfront area, Gaylord Pacific includes public access and amenities. Highlights include a public esplanade and a plaza and activity village with pedestrian promenades and bike paths, dining and snack stands, game activities, public art, and a pool with public access. The public will also be able to enjoy shopping and dining amenities, viewing terraces and lookout points, water features, beach games, and more.

Also, on June 15, the Port Board approved a three-year, approximately $1 million agreement with design consultant KTU+A to complete the design for the future Sweetwater Park, produce plan specifications, and provide construction support services. Sweetwater Park will be open when the resort hotel opens. The remainder of the design for Harbor Park (an expansion of Bayside Park to become Harbor Park), and the construction timeline will be determined at a later date.

For more details of the June 15 Board agenda item, click here.

Chula Vista Bayfront Master Plan
The CVBMP was collaboratively planned through extensive public outreach that included more than 100 community meetings and resulted in a comprehensive Environmental Impact Report and Port Master Plan Amendment, which was approved by the Board in May 2010 and certified by the California Coastal Commission in August 2012. When complete, the public will enjoy more than 200 acres of parks, a shoreline promenade, walking trails, RV camping, shopping, dining and more. The CVBMP also establishes ecological buffers to protect wildlife habitat, species and other coastal resources.