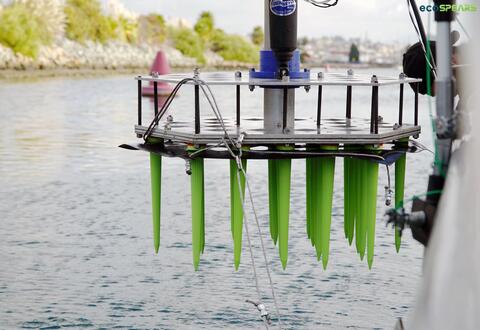 As part of a two-year pilot project under the Port of San Diego’s Blue Economy Incubator, ecoSPEARS, a cleantech solutions company ushering in the carbonless future of environmental cleanup for toxic contaminants, will deploy NASA-developed technology to remove Polychlorinated Biphenyls (PCBs) from sediments in America’s Cup Harbor. The primary goal will be to determine how much PCB mass the SPEARS technology will remove over a predetermined period.  The SPEARS technology will be deployed starting December 14.

“Our Blue Economy Incubator program seeks groundbreaking ways to protect the environment and San Diego Bay. The results of this pilot project have the potential to demonstrate an innovative win-win approach to a long-time pollution problem in waters worldwide,” said Commissioner Rafael Castellanos, Port of San Diego Board of Port Commissioners. “With a green approach that uses less emissions, energy, and water than traditional cleanup methods, this pilot project is a perfect complement to our efforts as a Port to ensure San Diego Bay remains a vital resource.”

ecoSPEARS is the exclusive licensee of the NASA-developed Sorbent Polymer Extraction and Remediation System (SPEARS), a sustainable remediation technology to extract PCBs, dioxins, and other persistent organic pollutants from the environment.

“We are extremely excited about our relationship with the Port of San Diego and its Blue Economy Incubator,” said Serg Albino, CEO of ecoSPEARS. “Areas like America’s Cup Harbor – where dredging and capping options are challenging – are prime candidates for our technology. We are fortunate to have a forward-thinking steward of the bay in the Port of San Diego that pushes the status quo when it comes to implementing clean innovation.”

SPEARS is an innovative, in-situ technology that absorbs PCBs “like a sponge”, from contaminated sediment in a safe and environmentally-friendly manner. SPEARS is a scalable mat-liner of plastic spikes filled with a proprietary reagent. They are deployed down into contaminated sediment or around challenging areas such as piers, harbors, pylons, or sensitive wetland areas where dredging may not be feasible. A key differentiator between SPEARS and environmental dredging is that SPEARS does not destroy the aquatic habitat nor resuspend contaminants.

Developed in 1929, PCBs were used worldwide in electrical equipment like capacitors and transformers, and as a flame retardant in everyday goods. The toxic chemical was banned from production in 1979 and is considered the most widespread contaminant in the world. PCBs are persistent, meaning they do not readily break down once in the environment. PCBs generally biomagnify along the food-chain, which leads to greater PCB concentrations in organisms that are higher up in the food chain.

The Port supports various pilot projects, like ecoSPEARS, through its Blue Economy Incubator that complement several environmental initiatives and often support regulatory requirements and programs already underway at the Port. For more information about the Blue Economy Incubator visit portofsandiego.org/waterfront-development/blue-economy.

ABOUT ECOSPEARS
ecoSPEARS is a cleantech solutions company ushering in the carbonless future of environmental cleanup. ecoSPEARS has designed and developed green and sustainable remediation technologies to extract and destroy PCBs, dioxins, and other Persistent Organic Pollutants (POPs) from the environment - forever.