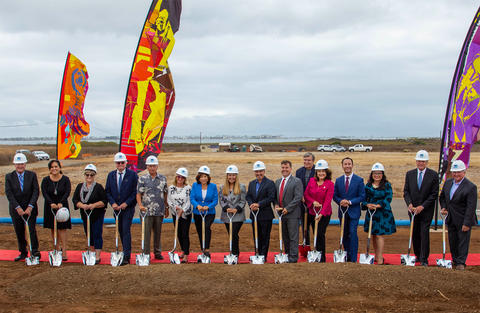 “The components are being put in place. After years of diligent work, and collaborating with the right partners, such as Sun Communities, this largely vacant and underutilized industrial landscape will soon be transformed into a thriving recreational, residential and resort destination right here on the Chula Vista waterfront,” said Chairman Garry Bonelli, Port of San Diego Board of Port Commissioners.

“The day is finally here when we are celebrating the start of construction on two bayfront projects,” said Chula Vista Mayor Mary Casillas Salas. “We are thrilled that work has begun on the new RV Park providing overnight accommodations and the Sweetwater Bicycle Path and Promenade that will create a wonderful walking and biking route on the northern edge of the bayfront. What a great day!”

The Costa Vista RV Resort, to be built at E Street and Bay Boulevard, will enhance public access and public recreation by providing lower-cost overnight accommodations, walking trails and other improvements on and around the site. It will also pave the way for the anchor of the Chula Vista Bayfront Master Plan, the future resort hotel and convention center, as well as the future Sweetwater and Harbor Parks, and roadways.

Sweetwater Path will be a multi-use pedestrian and bicycle pathway winding through the future Sweetwater Park in the northern portion of the Chula Vista Bayfront, and connecting the existing Bayside Park (site of the future Harbor Park) to Bay Boulevard at E Street. It is the first segment of a loop connecting to the Bayshore Bikeway at the northern and southern ends of the Chula Vista Bayfront.

“Thanks to the collective vision of the public, stakeholders, the Port, the City and our development partners, the South Bay community is getting what it has asked for for decades,” said Vice Chair Ann Moore, Chula Vista’s representative on the Port of San Diego Board of Port Commissioners. “This day is finally here, and I couldn’t be more thrilled to be celebrating it with everyone who has helped make it a reality. I can’t wait to celebrate the opening of the Costa Vista RV Resort and Sweetwater Path next year!”

“Sun Communities is honored and excited to be a part of the development of Costa Vista RV Resort on the Chula Vista Bayfront!” said Tom OBranovic, Sr. VP of Operations, Sun Communities. “We have been ‘all in’ since the project became a reality and we are dedicated to developing a resort that is second to none in the U.S., one that complements the wonderful features of the bayfront and the Port of San Diego’s master plan vision. We thank the Port and the City for their partnership and their faith in Sun…this will be an amazing project in a beautifully planned area of recreation, commerce, and hospitality. It’s ‘go’ time!”

“It’s about time that this project – which will provide good jobs, economic development and a beautiful bayfront - moves forward,” said California State Assemblywoman Lorena Gonzalez (D-San Diego). “Chula Vista has been looking forward to this day for over a decade.”

“The Sweetwater Bicycle Path will be a critical connector to the Bayshore Bikeway, allowing families to enjoy a fun, scenic ride and giving commuters an opportunity to leave their cars at home and bike to work at major job centers in San Diego and Barrio Logan,” said San Diego County Supervisor Greg Cox.

The Costa Vista RV Resort and Sweetwater Path will be the first major new components of the 535-acre Chula Vista Bayfront Master Plan, which envisions a world-class destination in Chula Vista on San Diego Bay – a unique place for people to live, work and play. When complete, the public will enjoy more than 200 acres of parks, open space, a shoreline promenade, walking trails, RV camping, shopping, dining and more. While providing long-awaited, enhanced shoreline recreation and an active, commercial harbor in the South Bay, the Chula Vista Bayfront project will also establish ecological buffers to protect wildlife habitat, species and other coastal resources.

On August 13, 2019, the Board of Port Commissioners granted a 66-year lease to Sun Chula Vista Bayfront RV, LLC, a subsidiary of Sun Communities, Inc., for its Costa Vista RV Resort. Sun, which recently acquired Northgate Resorts LLC, is based out of Southfield, Michigan and is an experienced, award-winning RV park developer and operator with more than 100 RV resorts across North America. Sun’s team includes the engineering and construction firm, Atwell, LLC. The Sun team has partnered with local contractors for the project – Tucker Sadler Architects, Rick Engineering and Wimmer Yamada Landscape Architects for project design, and Swinerton Builders for construction.

With opening anticipated for the spring of 2020, the primary features for Sweetwater Path include:

The total project cost for Sweetwater Path is $5.63 million, $4.8 million of which is being funded through an Urban Greening Grant awarded to the Port by the California Natural Resources Agency. The intent of the grant is to encourage the development of facilities that connect a community to destinations that they may normally drive to and to encourage the use of trees and vegetation to provide for oxygen production, carbon dioxide sequestration, and urban heat island reduction in temperatures. Additional funding of $794,000 is provided by the Port’s Capital Improvement Program and $33,000 is provided by the City of Chula Vista.

On July 24, 2019 the Board of Port Commissioners awarded the construction contract for the Sweetwater Path project, designed by KTU+A, to 3-D Enterprises, Inc., both based in San Diego.

About Chula Vista
The City of Chula Vista is located at the center of one of the richest cultural, economic and environmentally diverse zones in the United States. It is the second-largest City in San Diego County with a population of 270,000. Chula Vista boasts more than 50 square miles with coastal landscape, rolling hills, 65 parks, a marina, and miles of trails. Chula Vista is a leader in conservation and renewable energy, has outstanding public schools, and has been named one of the top safest cities in the country. Established neighborhoods, contemporary communities, a U.S. Olympic and Paralympic Training Site, and historic downtown all contribute to Chula Vista’s attraction for both families and businesses. A promising future includes implementing smart city technology citywide, developing the 535-acre Chula Vista Bayfront, and planning for a new university on 375 acres.

About Sun Communities
The company owns and operates or has an interest in 382 manufactured housing and recreational vehicle communities/resorts located in 31 states throughout the United States and Ontario, Canada, as of June 30, 2019. Sun Communities' portfolio consists of approximately 133,000 developed sites.

Established in 1975, Sun Communities became a publicly owned corporation in December 1993. The company is a fully integrated real estate investment trust (REIT) listed on the New York Stock Exchange under the symbol: SUI.

Sun Communities has twice been honored by the Manufactured Housing Institute as winner of the "Community Operator of the Year" award. The award is emblematic of Sun Communities' focus on professional management at the community level.