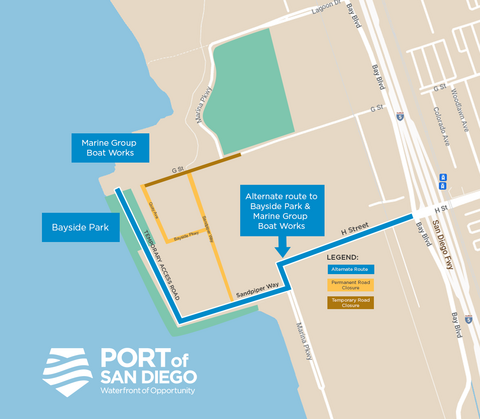 As part of the Chula Vista Bayfront redevelopment, construction crews are preparing to build and install new public roads and infrastructure in support of the future Gaylord Pacific Resort and Convention Center now under construction. This work impacts access to Bayside Park, some bayfront businesses, and the Bayshore Bikeway.

Starting on or shortly after Monday, August 22, 2022, G Street between Marina Parkway and Bayside Park will be temporarily closed and Quay Avenue south of G Street will be permanently closed. To get to Bayside Park and Marine Group Boat Works, use H Street to Marina Parkway to Sandpiper Way, which will extend to and through the park via a temporary access road. Directional and detour signs will be posted at least five days before closures begin. (Access to Bayside Park and Marine Group Boat Works will not be available from Lagoon Drive during the temporary G Street closure.)

The G Street closure, the second phase of an approximately three-year construction schedule (May 2022 – May 2025), is anticipated to end in August 2023. Details about future phases will be sent at a later date.

For more information about this project, go to portofsandiego.org/chulavistabayfront.

The Chula Vista Bayfront project envisions a world-class destination in the South Bay – a unique place for people to live, work and play. This redevelopment is designed to create new public parks and recreational adventures, improve the natural habitat, offer new dining and shopping options, provide a world-class hotel and convention center, and more – all for residents and coastal visitors to enjoy.

Visit the Chula Vista Bayfront
There is plenty of fun to be had: