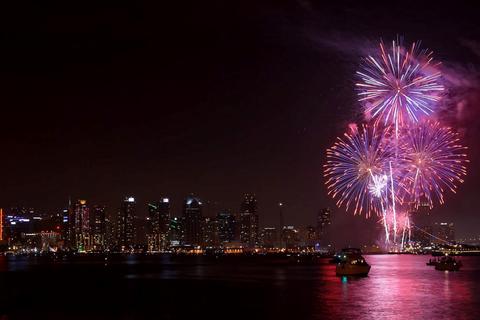 Starting at 9 p.m. on Thursday, July 4, 2019, some of the most technically advanced fireworks, in an array of shapes and colors, will launch simultaneously from four barges, providing a dancing display of patriotism. Choreographed by fireworks artists, the approximately 20-minute show will be set to music broadcast live on these iHeartRadio stations: Star 94.1, Channel 93.3, JAM’N 95.7, 101.5 KGB, ROCK 105.3, NewsRadio 600 KOGO, and XTRA Sports 1360. For the best broadcast audio experience, listen on a radio to avoid the timing delay experienced when streaming via mobile phone. A live telecast of the show can be viewed on both FOX 5 (San Diego & Baja, Mexico) and KTLA (Los Angeles and Southern California region).

Ranked as one of the top Fourth of July events in the country, the Port of San Diego Big Bay Boom draws approximately 500,000 San Diegans and visitors from across the globe to enjoy this celebratory and captivating event on the dynamic San Diego Bay waterfront.

Where to watch, transportation and parking:

Additionally, popular public locations around and on San Diego Bay include Shelter Island, Harbor Island, Embarcadero Marina Parks North and South, Cesar Chavez Park and Coronado Ferry Landing. The Port encourages spectators to get to the waterfront very early as parking will be extremely limited and traffic will be heavy. Options include free event shuttle service to Harbor Island and Shelter Island, along with the Port of San Diego Waterfront Shuttle that connects multiple locations on the San Diego bayfront, as well as parking facilities and public transportation. Advanced reservations for a guaranteed parking space are available on a limited basis. Click here to view parking and shuttle details.

Because of the large volume of visitors to Harbor Island and Shelter Island, the access roads to these parks may be closed to entering vehicles at some point during the day. Pedestrian and shuttle access will remain available. As part of efforts to ensure a safe and accessible waterfront, there will be zero tolerance for illegal parking. Double-parking, parking in a red zone and parking against posted signs will result in citations and/or towing.

To ensure a fun and safe experience for all, the Port of San Diego Harbor Police along with other local, state and federal law enforcement partners will be prominent on the bay and waterfront on July 4th. Public safety is everyone’s responsibility. Residents and visitors are encouraged to report suspicious activity to a uniformed officer or call 911 or the Harbor Police non-emergency number at 619.686.6272. The public should be prepared to describe who or what they saw, when they saw it, where it occurred and why it’s suspicious. The public is reminded possession of an opened alcoholic beverage is prohibited along the waterfront and in Port parks, and smoking and vaping are prohibited in Port parks. One final reminder is that drones and other unmanned aircraft systems are also illegal to fly within five miles of an airport and above crowds.

All boaters interested in viewing the event on the water are asked to be extra cautious and pay special attention to the Coast Guard Auxiliary patrol boats with flashing yellow lights. They will be ensuring boaters do not get within the 1,000-foot perimeter safety zones around the four fireworks barges. All boaters are also encouraged to review the ABCs of California Boating, which includes information on a recently-enacted law that requires children younger than 13 years of age to wear a life jacket on a vessel of any length.

Thanks to a sponsorship from the San Diego Port Tenants Association, the La Playa Anchorage near Shelter Island will be expanded prior to July 4th and permits will not be needed during this time. The special anchorage will open at 8 a.m. on Wednesday, July 3, 2019. Vessels attempting to enter before that time will be turned away. The La Playa Anchorage will close at 8 a.m. on Monday, July 8, 2019.

Boaters in the Glorietta Bay area of Coronado will not require a permit between noon on Wednesday, July 3 and 9 a.m. on Friday, July 5, 2019. City of Coronado Lifeguards will direct boaters to a special anchorage area in Glorietta Bay that has been designated for this timeframe. Vessels will not be permitted to enter the special anchorage area prior to noon on July 3. The A-5 Anchorage in Glorietta Bay will be closed due to its close proximity to the fireworks barge.